The Eastern Gate is a symbol of the soon return of Jesus. Let me explain what I mean. In June of 1967, during the Six Day War, I was serving as a professor of international law and politics at a college in Texas. Those were the days before the Internet, so I had to keep up with daily developments in the war through television and newspaper reports. Shortly after the war ended, I read a newspaper report that brought my attention to the Eastern Gate and to Bible prophecy. It also radically changed my life.

There are eight major gates to the Old City. The first and most important one is the Golden Gate, or the Eastern Gate, the only external gate that gives access to the Temple Mount. 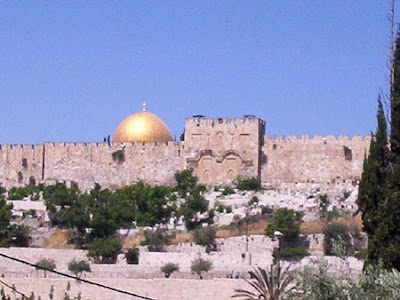 The Jordanians expected that the Israelis would attack from the west hitting the Jaffa Gate. And, therefore, they concentrated all of their fortifications and their troops at that point. However, the Israeli’s knowing that the Jordanians expected that, surprised them by sending troops around to the eastern side of the city under the cover of darkness where they launched an attack at the Lion’s Gate. The attack was successful. The Israelis broke into the city, captured it quickly, and then they rushed to the Western Wall to pray. It was an extremely emotional moment because it meant that the Jews were back in control of their city for the first time in 1,897 years, all in fulfillment of end time Bible prophecy.

The newspaper article I read about the Six Day War which literally changed my life said that the Jewish military leaders had engaged in a heated debate the day before the attack on the Lion’s Gate because someone had suggested that they attack instead by blowing open the Eastern Gate to be even more surprising to the Jordanians. According to the report I read, there was an Orthodox Jew present during these discussions, and he told the military commanders that they could not blow open the Eastern Gate because it had to remain shut until the Messiah returns. Now, that comment caught my eye and it fascinated me. What in the world was he talking about? I had no idea.

So, I got a concordance and I looked up the word “Eastern Gate” and I started running Scripture references. It did not take me long to find Ezekiel 44. In that section of Ezekiel, the prophet is being given a tour of the future Temple to be built in Jerusalem in the end times. And, in the process, it was pointed out to him that the Eastern Gate will be closed and will remain closed until the Messiah returns. I had gone to church all my life and I had never once heard about that particular prophecy.

I next turned to the Encyclopedia Britannica and I started reading about the Eastern Gate. I discovered that it was closed in the 1500’s when the Muslim leader, Suleiman the Magnificent, rebuilt the walls of Jerusalem that stand to this day. The intriguing thing is that no one knows for certain why the gate was bricked up. The tradition is that while the walls were being repaired, a rumor swept the city that the Jewish Messiah was coming. Suleiman called in the Jewish rabbis and asked what this rumor meant. They explained that the Jewish Scriptures prophesied that one day God would send a Messiah who would come from the East. He would enter the Eastern Gate and he would rid the city of all the enemies of the Jews and would then begin to reign over all the earth from Jerusalem.

Just as prophesied in Ezekiel 44, the Eastern Gate is closed and will remain closed until the Messiah returns. Psalm 24 describes how it will be blow open supernaturally to welcome the Messiah when He appears. Psalm 24:7 says, “Lift up your heads, O gates, and be lifted up, O ancient doors, that the King of glory may come in! Who is the King of glory? The Lord strong and mighty, the Lord mighty in battle.”

Every time I go to Israel the first thing I want to see is the Eastern Gate. To me it is proof positive that the Bible is the Word of God and that Bible prophecies can be trusted and can be interpreted literally. It is also a reminder of the promise of Jesus that one day very soon He will return.