Zero Hedge: “Less than two years ago, the US set up another puppet government in the mid-east this time in the state of Iraq when following substantial US pressure, on August 14, 2014 then prime minister al-Maliki agreed to stepped down and be replaced with Haider al-Abadi.

Today, the regime is in chaos and the system set up in Iraq by the US is collapsing when protesters loyal to popular Shiite cleric Muqtada al-Sadr breached the heavily fortified Green Zone, home to government buildings and foreign embassies and stormed the Iraqi parliament, forcing MPs to flee and resulting in a state of emergency being declared for all of Baghdad.

All gates that lead to Baghdad are closed. No one is allowed to enter into Baghdad, only those who want to leave Baghdad can do so.” “There is no evacuation for the American staff inside the American embassy,” he said. A U.S. official who spoke on condition of anonymity said the American Embassy in Baghdad was not being evacuated, contrary to local reports. We expect that should the pro-US government fall, this will promptly change. 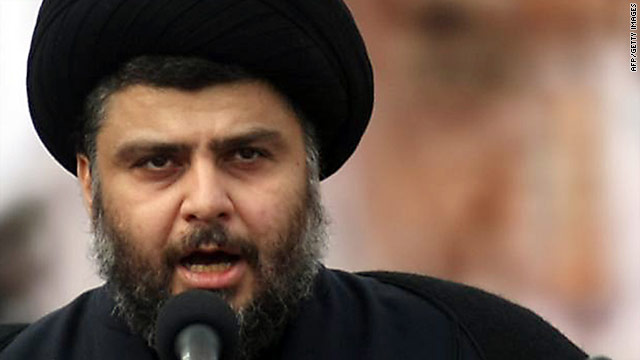 Opinion: Who could forget the chaos that Muqtada Sadr caused in April, 2004:

Members of the Mahdi Army carried out simultaneous attacks in Baghdad, Najaf, Kufa, and Amara, targeting American, Spanish, Salvadoran, and Iraqi coalition forces. Most of the casualties were the result of a clash between Mahdi Army militiamen and the Spanish garrison outside Najaf.

Sadr’s ability to mobilise a crowd of close to 100,000 demonstrates his ability to reinvent himself, once again, in Iraq’s post-2003 political landscape. In Sadr’s latest political incarnation, he has embraced the politics of protest to become both an anti-politician and king-maker. His latest rally is symbolic of his political movement’s evolution over a decade, a reflection of the vicissitudes of Iraq’s politics since 2003.

Sadr’s political prominence is startling given that his rise to power was not a certainty in post-2003 Iraq, and was almost undermined at several junctures. After the invasion of Iraq, Sadr was a young cleric in his late 20s, who only had his father’s reputation at his disposal.”

Muqtada Sadr‘s Mahdi army, named for the Shia belief of the 12th Imam, who will re-emerge from the 9th century AD to bring peace to the world and rule from Iran.

Each of the 4 power blocs of the final war of Armageddon will be led by a powerful leader. While it may be early to start pinpointing names it is interesting to watch for strong leaders to see if they continue to emerge.