Erdogan promised to fight to the bitter end against Donald Trump’s recognition of Jerusalem as the capital of the Jewish state.

“Palestine is an innocent victim… as for Israel, it is a terrorist state, yes, terrorist!” Erdogan said at a congress of his ruling Justice and Development Party’s (AKP) in the Turkish city of Sivas on Sunday. “We will not abandon Jerusalem to the mercy of a state that kills children,” he added. more …

Opinion: By far the most vocal critic of President Trump’s recognition of Jerusalem as Israel’s capital, Recep Tayyip Erdogan plays a double role: member of NATO and financier of ISIS and Hamas.

In 2010, Erdogan funded the Mavi Marmara flotilla incident that attempted to smash the Gaza blockade that prevents weapons from entering the terror state.

In 2012, Turkey was found to be the top financial supporter of Hamas, arranging for the transfer of $250-300 million to the terrorist group annually. 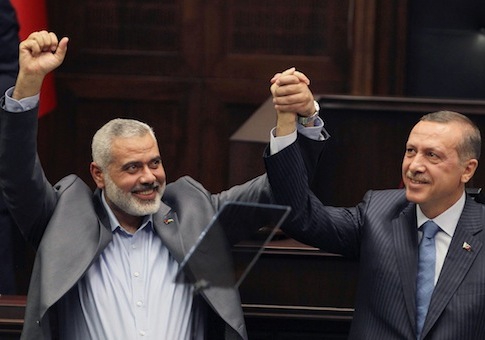 In 2014, during the Hamas-initiated war with Israel, a terror-linked charity closely associated with the Turkish government organized an event to sign up human shields for Hamas. At least 73 signed up, 38 of whom were women.

In 2015, Erdogan’s son, Bilal, was found smuggling ISIS oil into Turkey’s export facilities and onto tankers bound for international markets, while Sumeyye Erdogan, daughter of the dictator was reported as head of a covert medical facility for treating ISIS Fighters.

So why then is Turkey, a major financier of the most heinous terror groups on the planet, still regarded as a NATO ally?

Turkey is prophesied (Ezekiel 38:1-6) to join Russia, Iran and at least 4 North African Turkish allies in a final assault on the Jewish state. Depending on where we are on the Bible’s timeline we will watch for a deepening split between Turkey and NATO that could push Erdogan to make good on his threats to join the Shanghai Cooperation Organization (SCO), China and Russia’s security club.

The SCO today (China, Kazakhstan, Kyrgyzstan, Russia, Tajikistan, and Uzbekistan, India and Pakistan), is a perfect fit for Erdogan’s brand of authoritarianism.

In 2016 Erdogan said this: “Some may criticize me but I express my opinion. For example, I have said ‘why shouldn’t Turkey be in the Shanghai Five?’”

I think Ezekiel would agree.