Debkafile: The scandal over President Donald Trump’s defense of President Vladimir Putin against US intelligence at the Helsinki press conference – for which he, sort of, apologized – served him too as a distraction from a momentous military-intelligence deal the two presidents secretly contracted at their summit, with Israel’s approval.

DEBKAfile has obtained exclusive access to this deal and can reveal for the first time that it provides for the handover to Russian responsibility of all parts of southern and southwestern Syria abutting on the Israeli and Jordanian borders, including, most importantly, surveillance and observation elevations that oversee all parts of Syria, Iraq, Jordan, Israel, Lebanon and the eastern Mediterranean.

Trump and Binyamin Netanyahu thereby gave Putin a valuable asset for boosting Russia’s military presence in Syria and the region at large. more … Opinion: How does he do it? In 2013 after Bashar Assad crossed Barack Obama’s infamous red line and gassed his own citizens, Obama and Kerry threatened air strikes on Syria. Vladimir Putin stepped in and guaranteed the removal of all chemical weapons.

How does Vladimir convince two US presidents and an Israeli Prime Minister that he is an honest broker?

The obvious answer is a complete lack of, or disregard for Bible prophecy. In the final wars of this age Russia has significant roles to play. In the Gog Magog invasion we learn in the first two verses of Ezekiel 38 that Gog is a prince from a place called Magog. Bible prophecy scholars are in agreement that Magog was a son of Japheth, who was one of Noah’s three sons. Magog settled in what is now Russia and Ukraine.

Ezekiel 38:3 “Behold, I am against you, O Gog” gives us a clear idea how God sees this man.

Ezekiel goes on: “I will turn you around, put hooks into your jaws, and lead you out, with all your army, horses, and horsemen, all splendidly clothed, a great company with bucklers and shields, all of them handling swords.”

In Ezekiel 39:4 we learn that the attack will originate from the mountains, indicating the Golan Heights, which is critical in that there was an important oil find in December 2016  that Putin would have a great interest in controlling since Russia’s fragile economy depends on oil and natural gas sales. 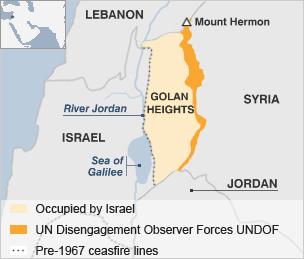 Vladimir Putin is now in charge of the border between Israel and Syria. How does he do it?