USA Today: Jamal Khashoggi, a critic of the Saudi government who lived in self-imposed exile in the United States, went missing Oct. 2 after entering the Saudi consulate in Istanbul to obtain paperwork he needed to marry his Turkish fiancée.

The journalist has been a contributing columnist for The Washington Post, which has reported that Turkish authorities have informed U.S. officials that investigators had recordings proving that Khashoggi was killed.

The Saudi government has denied that it played any role in a plot against the journalist.

President Donald Trump has said that he spoke to King Salman, and that the kingdom’s leader “firmly denied” involvement in the disappearance and alleged murder of Khashoggi. Trump also suggested that “rogue killers” may have been responsible, without providing any evidence for the theory. more … 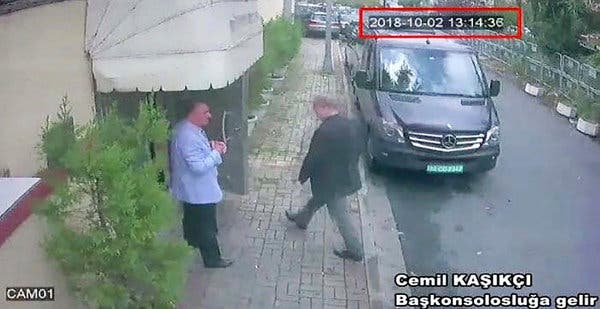 Here is what I have been able to figure out:

Jamal Khashoggi was anything but an innocent former reporter of the Washington Post. In high school he was a friend of Osama Bin Laden, as an adult he was an active member of the Muslim Brotherhood and a friend of Adel Batterjee, listed at one time as one of “the world’s foremost terrorist financiers” by the US Treasury Department.

Jamal Khashoggi was NOT a US citizen but WAS a resident of the State of Virginia. His disappearance has touched off fury and anger and a firestorm of rage by the leftist American media that adored him.

Perhaps the media could answer why the Washington Post was working with a Muslim Brotherhood propagandist?

The Trump administration is near to announcing the deal of the century and the Saudis are an integral factor.

If the US determines that the Saudis killed Khashoggi for nefarious reasons, the Sunni/Gulf States part of the peace plan could fall apart, and with it, diplomatic and economic relations between the US and the Saudis as well. The stakes are enormous.

Wall Street Journal: Khashoggi was not interrogated. A Saudi forensic specialist suggested others in the room listened to music using headphones while Khashoggi’s body was dismembered.

Treasury Secretary Steven Mnuchin announced that he will not attend next week’s international investment conference in Saudi Arabia because of the Khashoggi murder.

IMF chief Christine Lagarde, JP Morgan CEO Jamie Dimon, Blackstone CEO Stephen Schwarzman, as well as the chiefs of Uber, BlackRock, MasterCard and Viacom also said they would not be attending the meeting in Saudi Arabia.

A 31-year-old lieutenant in the Saudi Royal Air Force said to have participated in the killing of Khashoggi died in a “suspicious car accident” in Riyadh, according to Turkish media.

Somehow I’m guessing this affair is swept under the rug, what with billions of Saudi dollars flowing into the US economy via weapons purchases and (oil) investments. And then there is that peace deal …

Pope Says He’s ‘Very Saddened’ Over Hagia Sophia – But Why?

UN to declare Israel an ‘occupying power’ in Jerusalem

We Live In Dangerous Times – Three Flashpoints For War