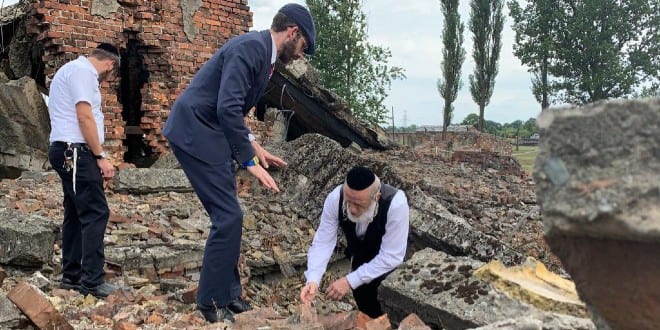 BIN: ZAKA recently received inquiries from tour guides and visitors to the extermination camps in Poland about the phenomenon of thousands of human bones floating above ground after the rain.

In coordination with government officials in Poland, a ZAKA delegation and representatives of the Committee for the Preservation of Jewish Cemeteries in Europe (CPJCE) recently visited the camps in order to assess the phenomenon. Engineers from the Polish government also participated in the delegation.

The delegation discovered many examples of human bone emerging from the ground. This phenomenon was witnessed over a wide area in Auschwitz-Birkenau, where over one million people, 90% of them Jews, were murdered. Many bone fragments were found, mainly in the ponds surrounding the crematoria, where some of the ash had been thrown.

According to Jewish law, all bone fragments larger than a grain of barley should be buried and ash should be treated in the same manner as bones. Read More …

Opinion: The bones rising up at the same time that heads of state of 49 nations are in Israel for the 75th anniversary of the liberation of Auschwitz, is a stunning reminder that two resurrections of the dead to eternal life are near.

First Resurrection of the Dead:

“For the Lord Himself will descend from heaven with a shout, with the voice of an archangel, and with the trumpet of God. And the dead in Christ will rise first” 1 Thess. 4:16.

Paul taught in 2 Cor. 5:17 “Therefore, if anyone is in Christ, he is a new creation” giving assurance to both Jew and Gentile who have accepted Christ’s payment for sin will rise to eternal life in the rapture.

“Then we who are alive and remain shall be caught up together with them in the clouds to meet the Lord in the air. And thus we shall always be with the Lord.” 2 Thess. 4:17

2nd Resurrection of the Dead:

Isaiah prophesied that Israel’s believing dead will be resurrected and the OT saints will shout for joy at the return of Christ:

“But your dead will live, Lord; their bodies will rise—let those who dwell in the dust wake up and shout for joy—your dew is like the dew of the morning; the earth will give birth to her dead.” Isaiah 26:19

Daniel also prophesied that those who are asleep in the dust will be resurrected at the return of Christ:

“And many of those who sleep in the dust of the earth shall awake, Some to everlasting life, Some to shame and everlasting contempt.” Daniel 12:2

Ron Paul: “What Has QE Wrought?”

Evidence mounting that the Fed made a mistake