Times of Israel: Britain’s Prince Charles said on Friday that he was heartbroken to witness the “suffering” and “hardship” endured by the Palestinians.

The remarks by the heir to the British throne, who was visiting the West Bank town of Bethlehem, were described by Britain’s Sky News TV as constituting “the biggest show of support that a member of the Royal family ever has [expressed] for the Palestinians.”

Speaking at Casa Nova, a Franciscan pilgrim house near the Church of the Nativity, Charles went on: “And I can only join you, and all communities, in your prayers for a just and lasting peace. We must pursue this cause with faith and determination, striving to heal the wounds which have caused such pain.”

He added: “It is my dearest wish that the future will bring freedom, justice and equality to all Palestinians, enabling you to thrive and to prosper. Read Article … 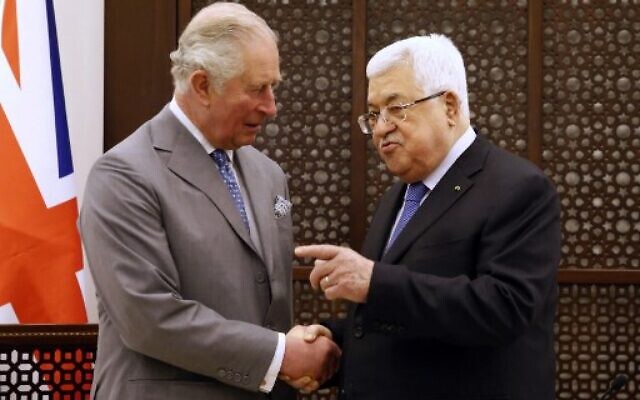 Opinion: The not-so-veiled pro-Palestinian/anti-Zionist, and heir apparent to the British throne, is reciting the same tradition that ended the British Empire’s reign. Anti-Semitism.

It is as if the 1917 Balfour Declaration (which specified the area of Palestine as a Jewish state) never even happened. After WWI the Ottoman empire collapsed, giving the allies mandates over the land once occupied by Arabs. Siding with Germany in the war was a fatal mistake.

When Britain was awarded Palestine in 1917, Lord Balfour designated the entire area as a national homeland for the Jewish people. The sun was very bright on the vast British Empire.

Fast forward to 1947. Britain had caved to Arab demands reducing the allotted Israeli land from 43,000 square miles to 5500 square miles, of which 75% was desert. That same year a Palestinian state and a Jewish state was offered to both sides. The Jews accepted, the Arabs did not.

The sun began to set on the British Empire. Today it is a shell of its former self Genesis 12:3.