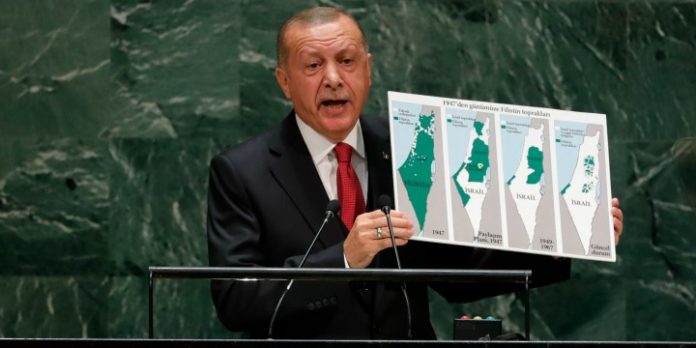 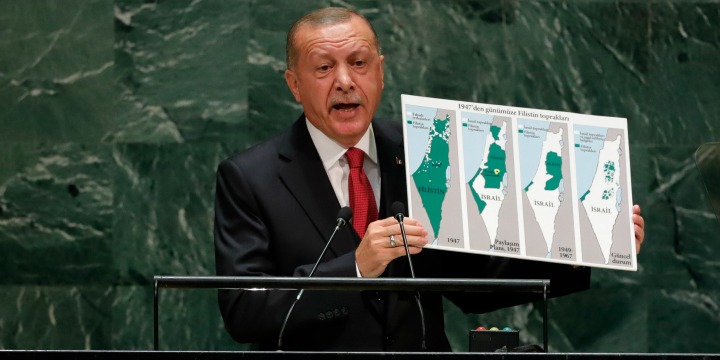 Algemeiner: Iran and Turkey led the way in condemning US President Donald Trump’s newly-announced Middle East peace initiative, denouncing the American proposal as a betrayal of the rights of the Palestinians.

“The devilish and vicious policy of America toward Palestine called the ‘deal of the century’ will never materialize,” Iranian leader Ayatollah Ali Khamenei declared in a Farsi-language tweet. “All Muslim nations will confront them and will not let it materialize.”

Opinion: The Trump peace plan is shining a light on the immense difficulty of trying to solve a 3500 year old blood feud. Almost no one knows its roots or its only solution.

The road to war:

By now it should be clear that Recep Erdogan is no friend of the US or Israel. It should also be clear that Erdogan has no interest in aligning with Bahrain, UAE, Oman or anyone else in forging a peace deal with the Palestinians. Even our supposed new friends the Saudis are playing it coy expressing support for continued negotiations.

As for Abbas, a CBN headline from yesterday…

Palestinians Give 1,000 No’s to ‘Deal of the Century’, but These Arab Countries Are Hopeful

… should make it abundantly clear that neither the Palestinians of the West Bank or the terror group Hamas of Gaza have any intentions of laying down their weapons, a key ingredient of the Trump plan.

So where does this leave us?

Is the stage is being set for Turkey and Iran to become benefactors in providing Israel’s enemies the funding for an all out 7-10 nation Arab war as prophesied in Psalm 83?

Arab/Persian nations that have serious religious differences with each other have one common denominator – hatred of Jacob (Genesis 35:10).

With each passing day we find Sunni Recep Erdogan becoming more aligned with the Shia Mullahs of Iran and its proxies, Hamas and Hezbollah. Both terror groups are identified in Psalm 83:6-7 as the ‘tents of Edom’ (Judea and Samaria/West Bank) and ‘the inhabitants of Tyre’ (southern Lebanon).

Israel’s enemies are lining up exactly as prophesied and waiting for a catalyst to attack.