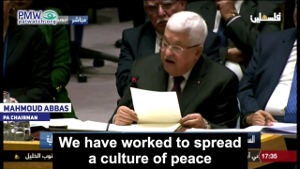 Palwatch: In his recent speech at the UN Security Council, it appeared Abbas had taken a trip to La La Land. His statements to the UN were almost like a comedy show – far from reality.

Yet Abbas’ own Fatah Movement marched into 2020 carrying knives, rifles, and suicide belts, at several rallies in different towns in the West Bank, as exposed by Palestinian Media Watch.

Comparing Abbas’ words with the following three videos of PA and Fatah messages to Palestinians, clearly demonstrates his attempt to deceive the UN and the world. Read More …

Opinion: Abbas knows he is in the right company; the UN has had more sanctions against Israel than all other nations combined.

Abbas not only has the support of the UN, but of most Democrat candidates for president as well. In fact, Sanders and Warren have voiced support for cancelling US aid to Israel, and moving the US embassy back to Tel Aviv.

Abbas has been terrorizing Israel for a long time:

September 5, 1972: Arafat’s slaughter of eleven Israeli athletes at the Munich Olympics; Mahmoud Abbas is reported to have arranged financing for the operation.

Throughout the 1980s, the Palestine Liberation Front (PLF), a terror group run by Mahmoud Abbas and associated with the PLO, run by Yasser Arafat, conducted terror operations throughout the Middle East.

September 2015: the Knife Intifada PA leaders called for Palestinians, young and old, to take up their kitchen knives and automobiles as weapons.

As of February 2018, there had been 192 stabbing attacks and 139 attempted stabbings; 173 shooting attacks; 61 vehicular (ramming) attacks, and one bus bombing targeted at Israelis during the uptick in violence beginning in September 2015.  Sixty-two individuals have been killed in these attacks.  source

Excerpts: Antichrist: The Search for Amalek