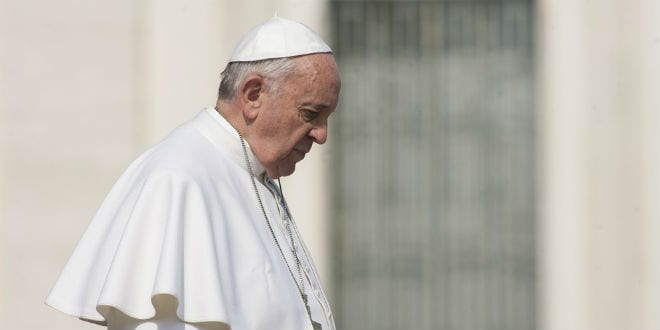 BIN: At an address to Vatican diplomats last month, Pope Francis announced that the Vatican will be hosting a global event with titled,  “Reinventing the Global Compact on Education.”

“A global educational pact is needed to educate us in universal solidarity and a new humanism,” the Pope said when he first proposed the summit.

A Vatican-backed website to promote the pact added: “Educating young people in fraternity, in learning to overcome divisions and conflicts, promote hospitality, justice and peace: Pope Francis has invited everyone who cares about the education of the young generation to sign a Global Pact, to create a global change of mentality through education.”

Opinion: Why not just say it – One World Religion. I get the feeling that the Catholic Magisterium study Scripture in seminary, and from then on, it is only Catechism 24/7.

The proof is that Pope Francis does not seem to be aware he is paraphrasing Revelation 13:11 “Then I saw another beast coming up out of the earth, and he had two horns like a lamb and spoke like a dragon.”

He even sounds like Hillary Clinton ‘It Takes a Village’:

“All change, like the epochal change we are now experiencing, calls for a process of education and the creation of an educational village capable of forming a network of open and human relationships,” he said.

Rabbi Pinchas Winston,  a prolific end-of-times author, noted that in many surprising respects, the Vatican is now practically indistinguishable from secularism.

“It used to be that the Catholic Church was the bastion that stood against liberalism in every way, denouncing it as heresy,” Rabbi Winston said. “This was the case for as long as the Vatican could impose its will on its people and influence the rest of the world. That reality has changed because they don’t have that power anymore. Pope Francis is a result of this change. He is a ‘man of the people.’”

(The church of ‘Laodicea’ translates to ‘the people rule’)

The date of the global educational summit is May 14, precisely 72 years after Israel proclaimed its independence. Rabbi Winston suggested that this could have a deeper meaning, indicating the inherent conflict between the Jewish people and universal religion.

The Beast of Revelation 13:1 watching from the wings, must be pleased.

Twitter: Tweeting “Burn Down Louisville” Does Not Violate Rules