Home Bible prophecy Sanders: Hamas will Ally with Israel for the Right Price 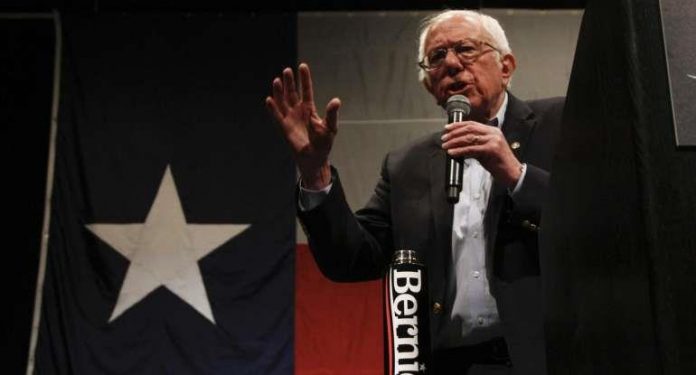 BIN: In a CNN Town Hall, Democratic 2020 hopeful Bernie Sanders addressed the Arab/Israeli conflict by first and foremost blasting Jerusalem’s Netanyahu led government saying that to be for peace in Israel does not necessarily mean supporting “right-wing, racist governments that currently exist in Israel.”

Sanders then lamented the situation in Gaza highlighting the coastal enclaves’ financial woes saying “Take a look at what’s going on in Gaza right now. You got youth unemployment 70%, you know people can’t even leave the area.”

The Vermont senator then claimed that Hamas would unite with Israel for the right price saying that  “What American foreign policy has got to be about in the Middle East, bringing the Israelis bringing the Palestinians together under the banner of justice. We could do it, we have the wealth to do it.” Read Article …

.@BernieSanders on #CNNTownHall: "To be for the Israeli people and to be for peace in the Middle East does not mean that we have to support right wing racist governments that currently exist in Israel… pic.twitter.com/L3tqrt3pcE

Opinion: Evidently Trump’s $50 billion economic plan for the made-up people group Palestinians, was just not enough for Bernie. Maybe a few trillion would make the descendants of Esau forget? Maybe not.

Bernie Sanders is a secular Jew. The common denominator of secular Jews is land for peace. Never mind that the Gaza Expulsion Plan of 2005 created one of the world’s most dangerous terror groups inside Israel. And never mind that this is the very people group that was prophesied to return to Israel in the last days to recapture Esau’s blessing.

“Even though Edom has said,
“We have been impoverished,
But we will return and build the desolate places” Malachi:1-4.

It is Edom (Genesis 36:1) who returned in 600 BC to help the Babylonian army tear down the first temple:

“Remember, O Lord, against he sons of Edom
The day of Jerusalem,
Who said, “Raze it, raze it,
To its very foundation!” Psalm 137:7

It was the Edomites who were in the land as the Jews were marched off to Babylon for 70 years of captivity. Upon the return of the Jews, Ezra 9:2 lamented that many Jews married into the Edomite tribes (mixed Jew and Gentile).

“For they have taken some of their daughters as wives for themselves and their sons, so that the holy seed is mixed with the peoples of those lands. Indeed, the hand of the leaders and rulers has been foremost in this trespass.”

And it was the Edomites who were there to accuse Jesus:

“So the scribes and Pharisees watched Him closely, whether He would heal on the Sabbath, that they might find an accusation against Him.” Luke 6:7

So what kind of Jew is Bernie?