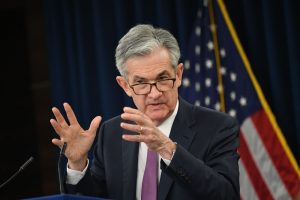 Bloomberg: The global death toll from the coronavirus outbreak surged past 3,000. New York City, Brussels and Berlin reported their first infections, while cases surged in South Korea. India reported two new cases, including one in the capital New Delhi.

Stocks rallied as the Bank of England said it will take steps to protect stability, the Bank of Japan promised liquidity and the Federal Reserve indicated it was ready to cut rates. Group of Seven finance ministers plan to coordinate their response this week.

Opinion: Last Saturday, I was interviewed by Jimmy DeYoung on his Prophecy Today radio program. Jimmy asked me what I thought would happen if the economic supply line from China were interrupted.

Here was my response:

“China is a major manufacturer of everything from clothing to microchips to even prescription drugs. A disruption in the supply chain will cause corporate earnings to drop as we saw with AAPL and MSFT warning that future earnings will be affected.

The big thing to watch here is the Federal Reserve who so far has been very quiet. Some analysts think the Fed will at some point provide stimulus to the market by dropping interest rates.

Another thing to watch is that the stock market often prices in worst case scenarios, and at some point, will be oversold and rallies can happen, at a time and often when people least expect them.”

Clairvoyant? Hardly, since the 2008 financial crisis the five major central bankers have been printing money non-stop in an effort to prop up the global economy, using an economic process called quantitative easing (QE).

The new money gets deposited into banks, which then buy government bonds, driving down interest rates and providing stimulus to the global economy. Rinse-repeat …

Problem: The new money becomes added debt to the growing mountain of debt that despite the supposed economic recovery, has never been paid back.

The Chinese call it death by a thousand cuts.

You can hear a replay of the radio program here.

James Younger, At Age 3, To Dad: Mommy Tells Me I’m A Girl