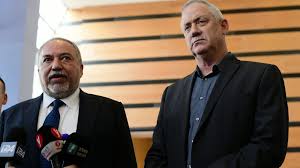 In an effort to break the country’s year-long political deadlock, Gantz reached out publicly to some unlikely coalition partners, betting that their shared goal of ousting Netanyahu could bring them together.

“Most Israelis are Zionists, and they just cannot accept that four anti-Zionist parties would be allowed in the government,” said Michael Milshtein, head of the Palestinian Studies Forum at the Moshe Dayan Center at Tel Aviv University. “There is a deep, psychological fear that they would want to change the basic character of the Jewish state, and while most Jewish Israelis want equality, they just can’t allow the Jewish and Zionist character of the state to be eradicated.” Read Article …

Opinion: Left-wing Israel news organizations are not much different than those in the US. While Netanyahu’s legal woes make big news, Benny Gantz’s legal troubles and anti-US adviser somehow gets lost.

On January 27, while visiting Washington at President Trump’s invitation, Gantz brought an adviser who likened Trump to Nazi leader Adolf Hitler, and insinuated that he colluded with Russian President Vladimir Putin. He has also suggested that Trump play Russian roulette with North Korean dictator Kim Jong-un.

One month later, according to Breaking Israel News (here) Iranian intelligence officials managed to download intimate videos from Benny Gantz’s mobile device. In the clips, the opposition leader and Netanyahu’s political adversary appears to be manipulating himself. The videos were made while Gantz was still the IDF chief.

“In a dramatic shift, the Joint List alliance of Arab-majority parties recommended Blue and White leader Benny Gantz for prime minister on Sunday, seemingly paving the way for the centrist party to get the first crack at assembling a coalition.

The decision marked the first time Arab parties — separately or together — have recommended a mainstream Zionist politician since 1992, when they supported Labor Party leader Yitzhak Rabin, who campaigned on peace with the Palestinians.”

So what kind of deal would Benny Gantz have to make to get support of the Arab parties?

Kerry: We protected Israel from unfair treatment at Paris summit