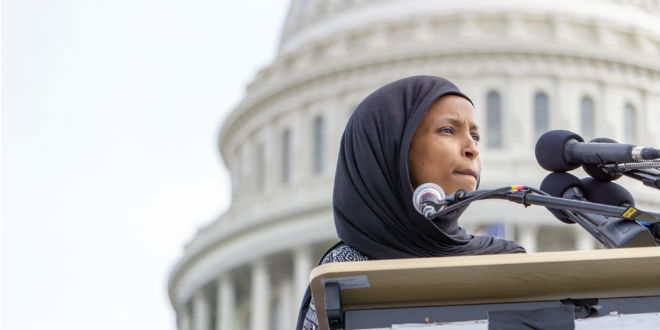 “In that day I will all but annihilate all the nations that came up against Yerushalayim.” Zechariah 12:9 (The Israel Bible™)

BIN: Bernie Sanders, the Vermont Senator and frontrunner for the Democrat candidacy to run for president in 2020, spoke at a campaign rally in Springfield, Virginia on Saturday, the Jewish sabbath. Patch reported that thousands of Sanders supporters attended the rally

Omar addressed accusations that Sanders supporters, referred to as Bernie Bros, are frequently aggressive and violent.

“They will say this is a campaign about Bernie Bros,” Omar said. “If that’s the case then count me in as a Bernie Bro.”

When he took the stage, Sanders called Omar “one of the greatest people I know.” Read More …

Opinion: We have attempted to address this many times. Jewish people who recognize Arab rights to the land God gave to Abraham and his descendants ‘after him’ (Genesis 17:7-8) are typically either secular Jews who will root for the underdog even at their own peril, those who are ignorant of Scripture, or both.

The Old Testament  accounts of the blood feud between Jacob and Esau clearly identifies the beginning of the problem Genesis 27:41 Malachi 1:1-3, while the New Testament clearly affirms the Old Testament record in Romans 9:13, Hebrews 16:12.

The interesting part is that Ilhan Omar has no problem being vocal with her anti-Semitism, while Bernie Sanders has no problem praising her as one of the greatest people he knows.

No one accuses Bernie of being ignorant, and yet it does not seem possible that he doesn’t know that a two state solution has been in place since 1922 when Jordan was established as a home for Arab people.

Self loathing of ones heritage is common theme we found when researching Antichrist: The Search for Amalek. We typically found it in descendants of Esau who was half Jewish and half Canaanite, but we have no evidence that Bernie is in that camp leaving the only conclusion an absence of the wisdom found in the Jewish Bible:

2 Chronicles 1:10 “Now give me wisdom and knowledge, that I may (B)go out and come in before this people; for who can judge this great people of Yours?”

Proverbs 9:10 “The fear of the Lord is the beginning of wisdom,
And the knowledge of the Holy One is understanding.”

James 1:5 “If any of you lacks wisdom, let him ask of God, who gives to all liberally and without reproach, and will be given to him.”