Home Bible prophecy “This Will Be A Tsunami” – USA Has New Problem: How To... 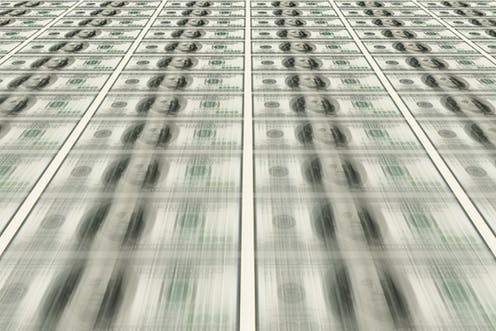 Zero Hedge: Markets have rejoiced over the prospect of an unprecedented stimulus bill, which was passed by unanimous vote in the Senate earlier this week, and is awaiting passage in the House on Friday. But as BMO rates strategist Ian Lyngen argued in a note published earlier this week, passing the stimulus bill into law is merely the first hurdle.

After that, bureaucrats will need to figure out how to get the money to the people, while individuals and small/medium business owners pray that the money finds its way into their hands before they’re driven into bankruptcy or starvation (or both).

The quest to distribute the money will require cooperation between various state and federal systems on a level that’s unprecedented, while states make adjustments to their unemployment systems and other processes to disburse the federal grant money in ways that have never been done before. Read More …

Opinion: It was March 23, 2020 when it happened. That was the day I agreed with Democrats that the best way to distribute $2 trillion dollars would be with digital dollars. In this day of sanitizing everything, who wants to touch cash?

I didn’t know that day that the technology for central bank currency was ready to go. It didn’t happen this time but get ready, it’s coming, and when it does, the central banks will be in complete control.

‘The bill establishes a digital dollar, which it defines as ‘a balance expressed as a dollar value consisting of digital ledger entries that are recorded as liabilities in the accounts of any Federal Reserve Bank or … an electronic unit of value, redeemable by an eligible financial institution (as determined by the Board of Governors of the Federal Reserve System).’ Additionally, a digital dollar wallet is identified as ‘a digital wallet or account, maintained by a Federal reserve bank on behalf of any person, that represents holdings in an electronic device or service that is used to store digital dollars that may be tied to a digital or physical identity.’

Suppose one day the Federal Reserve decides to halt buying and selling for certain groups of people which the government determines are illegal, or discriminatory, or racist, or promote harmful behavior? (Revelation 13:16-17)

Once all money is digital, will we really own it?