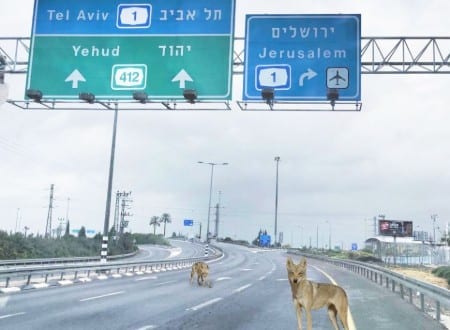 BIN: As the new health restrictions have kept the Israeli people off of major highways, wild animals have filled the void.

On Israel’s most frequented freeway, ‘Highway 1’, connecting Jerusalem and Tel Aviv, packs of foxes were photographed scavenging on the popular thoroughfare.

But it wasn’t only on highways. In Eilat’s once bustling boardwalk, herds of ibex were caught roaming an area they would never consider entering before the Coronavirus crisis took place. Read More …

Opinion: Every day we get another glimpse of one of the 4 horsemen of the Apocalypse.

“When He opened the fourth seal, I heard the voice of the fourth living creature saying, “Come and see.” 8 So I looked, and behold, a pale horse. And the name of him who sat on it was Death, and Hades followed with him. And power was given to them over a fourth of the earth, to kill with sword, with hunger, with death, and by the beasts of the earth.” Revelation 6:7-8