Home Bible prophecy Gov. Cuomo on Battling COVID-19: ‘We Brought the Number Down, God Did...

CNS News: While discussing the effects of COVID-19 on New York State, including a plateauing of total hospital admissions and a decline in net hospitalizations and ICU admissions, Gov. Andrew Cuomo (D) said “the number is down because we brought the number down. God did not do that….” Read More …

Opinion: When Andrew Cuomo was running for governor in 2010, he claimed time and again that he wanted to represent and fight for all the people of New York – all, that is, except Catholics.

Since taking office in 2011, Cuomo, who was baptized a Catholic, graduated from Archbishop Molloy H.S. in Queens County and Fordham University, has been hell-bent on offending Catholics and dismissing their beliefs in the public square.

The man who celebrated abortion at the moment of birth by lighting up the Empire State building in pink lights, has a bone to pick with God’s word.

Funny how that works. Many ex-Catholics like myself find ourselves in opposite theological positions from Catholic dogma. Some become secular progressives, and others turn to the Scriptures and scream the gospel of faith alone from the roof tops.

Cuomo’s position is obvious. And the really sad part is that by fighting against the Bible he is in danger for eternity.

My journey out of Catholicism began in the late 90’s. My wife joined a Bible study group with my late Mom, a life-long Catholic who developed a burning desire to know what the Bible had to say.

My mother was the only child of 4 that inherited her father’s passion for the Bible. Grandpa was a barber who, in between haircuts, would read his Bible. (I was recently given his old Bible and plan to get it restored.) 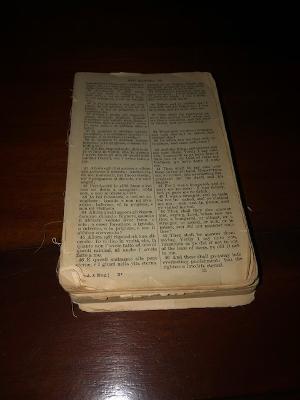 As a child I really didn’t realize what he was reading, but everyone knew that before family dinners, Grandpa would say the blessing. The only words I understood were “Thank-a you, God”. From there Grandpa spoke in Italian for what seemed like a very long time until my mother’s older sister would grumble to let him know dinner was getting cold.

My mother passed that interest in Scripture to my wife, and after I realized I couldn’t talk her out of it, I picked up a Bible and started to read.

It was in October 2000, on a flight to a company trip in California, that a man sitting next to me started a conversation. It was a three-hour flight from Dallas to San Diego and I had planned to use the time to figure out how a person could be born again and still continue to sin.

The guy next to me ignored my attempts to remain quiet, and by the time we were taking off we were on a first name basis. After basic introductions I found out that my new friend taught at Southeastern Baptist Theological Seminary. Hearing that, I lifted the Bible off my lap and said, ‘Maybe you can help me with this?’

My path to Jesus Christ was set that day and I plan to keep the governor of New York, my pale of birth, in my prayers.