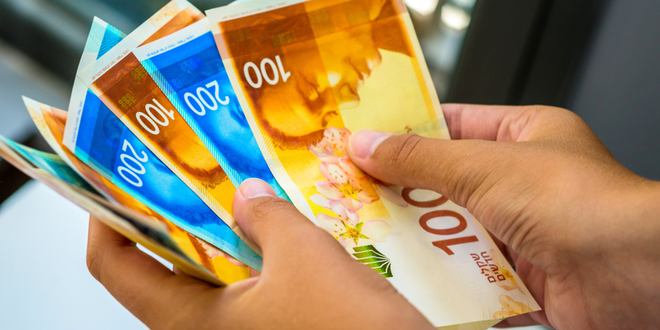 BIN: In this time of international crisis, affecting nearly every nation in the world, and plunging the economy into the worse recession since the Great Depression of the 1930s, Israel just issued a $5 billion bond offering. Amazingly, this bond offering was oversubscribed by a factor of 5 times that, meaning that Israel could have borrowed $25 billion.

The interest rate that Israel got was also very competitive. Lower credited countries typically have to pay higher interest, and Israel is considered to have a high credit rating, so the interest was lower.

One crucial point, even with Israel’s increased international debt obligations as a result of this bond offering, from the late 1990s until today, Israel has become a net CREDITOR to the international community.

This was one of the curses that God warned would befall the Jewish people if they did not observe His laws in the land:

The stranger in your midst shall rise above you higher and higher, while you sink lower and lower. he shall be your creditor, but you shall not be his; he shall be the head and you the tail. (Deuteronomy 28:43-44)

Opinion: The US, on the other hand, is the largest debtor nation in the world.

“The rich rule over the poor,
and the borrower is slave to the lender.” Proverbs 22.7

As global debt ($253 trillion) strangles the world, the US, the world’s economic engine, is leading the way to becoming a slave.

The United States is not only in the process of increasing it’s $23 trillion by 30% due to the Covid-19 crisis, but there is talk of much more debt to come.

Fed’s Balance Sheet Blasts to $5.8 Trillion; Suggests Fed Is Back to Bailing Out Foreign Banks along with Wall Street

If one day the nations decide not to buy America’s debt at near zero interest, the US dollar will be in crisis.

The black horse rider has scales with which to measure the comparative value of money and food.

Very soon after the church is taken up in the rapture (1 Thess. 4:16-17), and the 7 year tribulation period begins (Jeremiah 30:7), food prices will rise causing hyperinflation that will grip the whole world.