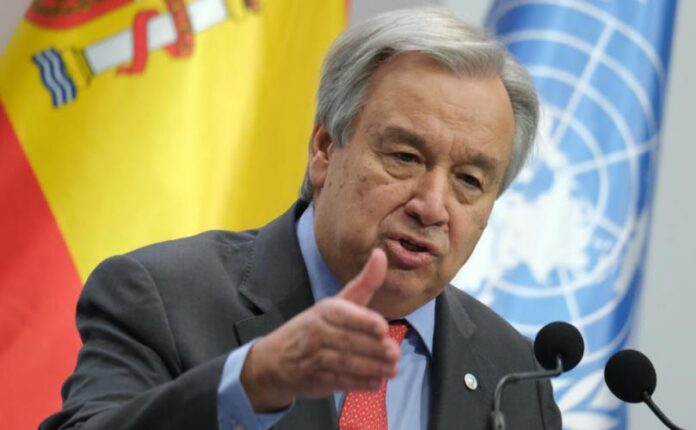 Lifesite News: Although Guterres doesn’t state it explicitly, he seems to be connecting the new fund, which he calls a “dedicated COVID-19 Response and Recovery Fund,” with the massive stimulus package plan, announcing both measures in the same press release.

If countries were to accept the plan, the United Nations or some similar coordinating agency would be given the equivalent of approximately 8.7 trillion USD, an unprecedented amount that would be 2,900 times greater than the UN’s annual budget of 3 billion USD.

The proposed plan would effectively place a global agency, presumably the UN itself, in charge of propping up the economies of the world during the coronavirus crisis, placing it in charge of 10% of global income. Read More …

Opinion: I can’t help but believe Barack Obama would be the first to sign up, similar to his instructing John Kerry to sign on to the UN gin confiscation plan of 2012 and the Paris global warming scheme to bankrupt America in the 2015 Paris Climate Accords.

Lets take a trip down memory lane and look at the UN scandals that shook the world:

2002: The United Nations Population Fund has been accused by different groups of providing support for government programs which have promoted forced-abortions and coercive sterilizations.

2005: The $64B Oil for Food Program is called  “the biggest financial scandal ever.” The program was designed to soften the impact of UN sanctions on the Iraqi people by allowing the supervised sale of some Iraqi oil, it ended up enabling Saddam Hussein to haul in lots of money and enriching many other shady types.

2017: UN Sex Abuse Scandal involved peacekeepers who ran a child sex ring in Haiti over a 10-year period and none were ever jailed. The report further found that over the past 12 years there have been almost 2,000 allegations of sexual abuse and exploitation by peacekeepers and other UN personnel around the world. AP found the abuse is much greater than previously known.

UN Resolutions Against Israel: From 1995 – 2013 the UN passed 77 resolutions against Israel and 0 against the Palestinians source.

In 2016, the most egregious offense against Israel came form Barack Obama:

The following series of moves by the Obama/Kerry team, in conjunction with the United Nations led to the carefully orchestrated UN Security Council vote:

That the UN wants 10% of the world tax dollars would be hysterical, if not for a future Barack Obama who would be willing to hand it over.

The brutal BDS tactics that harmed hundreds of Palestinians