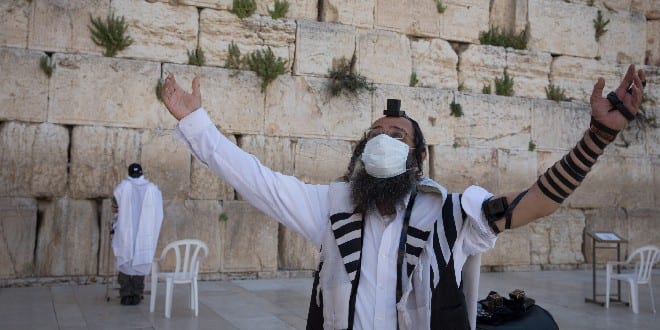 Pray for the well-being of Yerushalayim; “May those who love you be at peace. (Psalm 122:6)

BIN: Israel’s capital, Jerusalem, is also the nation’s most populous city, with 924,800 residents, according to data released by the Central Bureau of Statistics ahead of Jerusalem Day 2020. …

One out of every 10 Israelis lives in Jerusalem, and 560,000 of the city’s residents are Arabs, according to the report. Still, the city has suffered from negative population growth for years, and thus far 2020 has seen 8,400 residents move away. Read More …

Opinion: Borrowing from a song by Bachman–Turner Overdrive (1974)

“You ain’t seen nothing yet!”

‘I will return to Zion,
And dwell in the midst of Jerusalem.
Jerusalem shall be called the City of Truth,
The Mountain of the Lord of hosts,
The Holy Mountain.’”  Zech. 8:3

The scene is the millennial reign of Jesus Christ. The Tribulation is over. The Church has been in the New Jerusalem since before the tribulation and Zechariah prophecies a joyful scene in Jerusalem on earth:

“‘Old men and old women shall again sit
In the streets of Jerusalem,
Each one with his staff in his hand
Because of great age.
5 The streets of the city
Shall be full of boys and girls
Playing in its streets.’” Zech. 8:4-5

To fully grasp the significance of this scene we have to go back to the long unfulfilled blessing Isaac gave to his youngest son Jacob, whom Good renamed Israel (Genesis 35:10) 3500 years ago in Genesis 27:28-29

Therefore may God give you
Of the dew of heaven,
Of the fatness of the earth,
And plenty of grain and wine.
29 Let peoples serve you,
And nations bow down to you.
Be master over your brethren,
And let your mother’s sons bow down to you.
Cursed be everyone who curses you,
And blessed be those who bless you!”

Now look at Zechariah 8:23 and see how God fulfills the blessing:

“Thus says the Lord of hosts: ‘In those days ten men from every language of the nations shall grasp the sleeve of a Jewish man, saying, “Let us go with you, for we have heard that God is with you.”