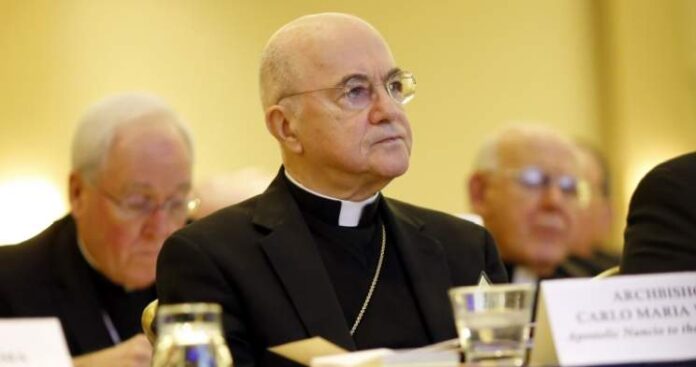 The New American: A document titled “Appeal for the Church and the World: to Catholics and all people of good will” — principally written by former apostolic nuncio Archbishop Carlo Viganò (shown) and promoted by an ad hoc organization that calls itself Veritas Liberabit Vos (the truth shall set you free) — makes some stark, accusatory statements about the harsh, restrictive abridgement of personal and religious freedoms imposed by governments in response to the COVID-19 pandemic.

The document wasted no time in getting to the point, stating in the second paragraph, “Under the pretext of the Covid-19 epidemic, the inalienable rights of citizens have in many cases been violated and their fundamental freedoms, including the exercise of freedom of worship, expression and movement, have been disproportionately and unjustifiably restricted.”

The New American has reported about churches in this country resisting the onerous restrictions placed upon their efforts to conduct worship services. On May 12, we reported about two Illinois churches, Elim Romanian Pentecostal Church and Logos Baptist Ministries, who filed for a temporary restraining order against the enforcement of Governor J.B. Pritzker’s “Five Point” coronavirus plan, which potentially prohibits religious gatherings of 50 people or more through 2021, or when a vaccine or viable treatment option becomes available.

Opinion: The move toward global government must be especially scary for Post Trib theology churches, those denominations that teach that the saved church will suffer the same 7 years of tribulation as the Christ-rejecting world.

In Post-Trib there is no distinction between the church and Israel and the time of trouble for Jacob (Jeremiah 30:7) that will lead to his salvation (Zechariah 12:3; Romans 11:26-27) is also about the church.

What we all can agree on, however, is that world government showed itself in authoritarian governors and mayors who seemed to take pleasure in making outrageous demands on their citizens. It showed itself in criminals being released and business owners being jailed. And it showed itself in 3 billion of us staying home away from family, work and friends, wearing gloves and masks over a virus that turns out to be far less deadly than heralded.

We are fighting against an invisible enemy that seeks to divide citizens, to separate children from their parents, grandchildren from their grandparents, the faithful from their pastors, students from teachers, and customers from vendors. Let us not allow centuries of Christian civilization to be erased under the pretext of a virus, and an odious technological tyranny to be established, in which nameless and faceless people can decide the fate of the world by confining us to a virtual reality.

The Upstart Prince of Saudi Arabia