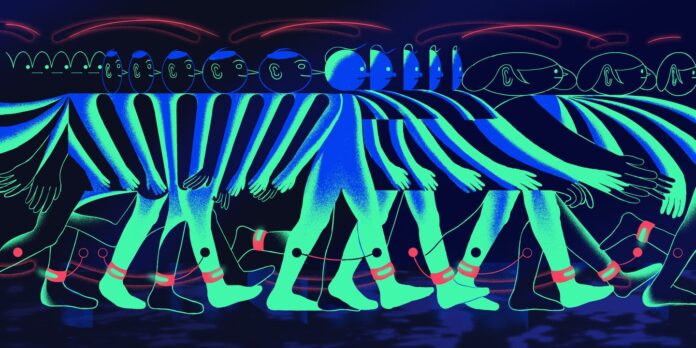 The Intercept: Unlike smartphones, de facto tracking devices in their own right, strapped-on trackers are expressly designed to be attached to the body and exist solely to report the user’s whereabouts and interactions to one or more third parties; they don’t play podcasts or tell you how many steps you took that day to sweeten the surveillance.

But a climate of perpetual bio-anxiety has paved the way for broader acceptance of carceral technologies, with a wave of companies trying to sell tracking accessories to business owners eager to reopen under the aegis of responsible social distancing and to governments hoping to keep a closer eye on people under quarantine.

Take AiRISTA Flow, a Maryland-based outfit that helps corporations track their “assets,” breathing or not. In an April 21 press release, the company announced it would begin selling Bluetooth and Wi-Fi trackers to be worn on an employee’s wrist like a Fitbit — or around their neck like a cowbell. “When people come within six feet of each other for a period of time,” the company wrote in a press release, “the device makes an audible chirp and a record of the contact is made in the AiRISTA Flow software system.” But the tracking goes far beyond audible chirps: AiRISTA’s platform allows employers to continuously upload a record of close encounters to a corporate cloud, providing an up-to-date list of presumed social distancing violators that would double as a detailed record of workplace social interactions.

The company’s marketing language is explicit in talking up the nonviral benefits of tracking your workers’ every move. Read More…

Opinion: A new thought came to me as I began writing this one. Is it possible that when the fulfillment of the mark of the beast (Rev. 13:16-17) comes, people will be so used to authoritarian controls that it won’t be a surprise?

Israeli surveillance outfit SuperCom is literally repackaging as a Covid-19 “solution” technology previously used on incarcerated or criminally convicted people. The security company has customers in 20 countries, including the U.S., and claims decades of experience with what it calls in a press release “secured boundaries projects,” like border crossings and home confinement. It’s the house arrest expertise that the company is now marketing as PureCare,

“SuperCom’s PureCare is a state-of-the-art solution for quarantine and isolation monitoring to aid government efforts in containing and limiting the reach of infectious diseases. It works within existing healthcare containment models for control and surveillance of patients. PureCare is a non-intrusive patient friendly system that constantly tracks patient location within buildings, vehicles and outside.”

Memo to the tens of thousands of ‘preppers’ out there who have turned their garages into mini-survival camps with freeze-dried foods, solar ovens, and night-vision goggles, he, Antichrist, will find you with a click of the mouse.

Memo to Christians: In Genesis 6:14 God told Noah to cover the Ark, inside and out with pitch:

“Make yourself an ark of gopherwood; make rooms in the ark, and cover it inside and outside with pitch”

The Hebrew word for atonement kaphar is the same word used in Genesis 6:14 for pitch, meaning to cover. When a person accepts the blood offering for sin that Jesus’ death provides, their sins are covered inside and outside.  That person is forgiven forever Hebrews 9:22:

“… without the shedding of blood, there can be no forgiveness of sins”