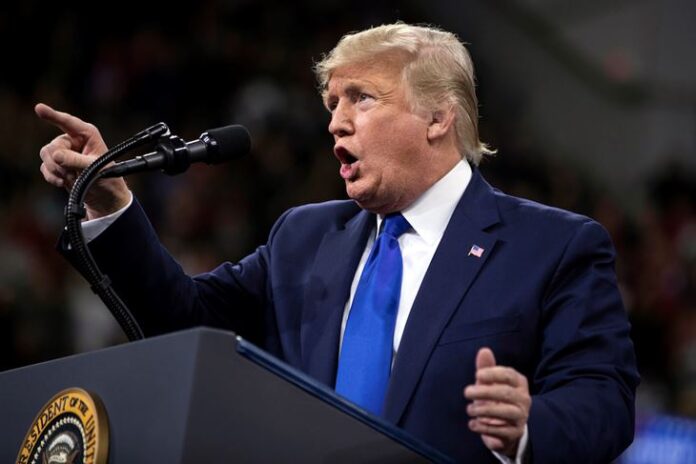 PJ Media: Does anyone seriously think that if Donald Trump were not president, the coronavirus pandemic would have never hit America? The super PAC Democratic Coalition — which supports presumptive Democratic nominee Joe Biden — apparently does, because it has launched a series of ads describing deaths from the coronavirus as the “Trump Death Toll.”

For Memorial Day weekend, Democratic Coalition decided to jump the gun and push ads putting the “Trump Death Toll” at 100,000 — in Twitterspeak, “#TrumpDeathToll100K.”

It is absurd to blame Trump for every single coronavirus death, especially when the PAC supports Joe Biden. Democratic Coalition’s ad should get a “pants on fire” fact-check rating. Read More …

It's Memorial Day weekend and this year, we should all reflect upon and mourn for 100,000 of our fellow Americans who have lost their lives to #COVID19.

A great many of those fallen countrymen could have been saved, if only Trump had done his job.#FocusOnTheTrumpDeathToll100K pic.twitter.com/mQkOzJLhZ5

Opinion: The Democrat 2020 election theme is clear. They couldn’t get Trump by setting up his National Security adviser Michael Flynn, they could’t get Trump on a phony dossier, and they could’t get him on Russian collusion to fix the election, so here we have the next phony charge. Murder.

The 2016 election was about nationalism v. globalism. How ironic that today so-called globalists have shut down borders to try to prevent the spread of Covid-19.

The 2020 election is about liberty v. Big Brother. Today, authoritarian governors and mayors are trying in vain to keep the virus lockdown in place until November to convince the country to demand a ‘vote from home‘. Democrats forever.

The party that denied God and Jerusalem in their 2012 convention, the party of abortion even up to the moment of birth, the party of same-sex marriage, the party that promotes transgenderism, and the party that is threatening Israel over annexation of its Biblical heartland, would like you to elect a puppet who is incapable of stringing two sentences together as president of the United States.

The battle lines are drawn this Memorial Day.