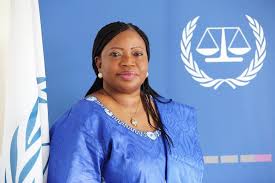 JPost: International Criminal Court Prosecutor Fatou Bensouda on Thursday doubled down on her position that “Palestine” is a state in a climax bringing closer a grand all-out alleged war crimes legal battle with Israel.

How the three ICC Pretrial Chamber judges rule now that Bensouda has filed her highly influential position will have fateful consequences for Israel on a legal, diplomatic and public relations level.

The case would very likely not proceed if the ICC does not accept ‘Palestine’ as a state since most cases start only if referred by a state.

On December 20, Bensouda had already ruled that Palestine is a state and that there was sufficient evidence that both Israel and Hamas committed war crimes, warranting her opening a full criminal investigation. Read More …

Opinion: Calling the ICC a kangaroo court to prosecute Israel would be kind.

On December 31, 2000, former president Bill Clinton issued the following official statement from Camp David. “The United States is today signing the 1998 Rome Treaty on the International Criminal Court. In taking this action, we join more than 130 other countries that have signed by the 31 December, 2000 deadline established in the Treaty.”

Clinton’s action, taken in the final hours of his presidency, won praises from the international elitists and Ivory Tower editorialists for taking his ‘bold’ action.

Some background: A permanent international court has been on the globalists’ wish list since the end of World War II.

The expansive jurisdiction claimed by the ICC would put every U.S. serviceman and woman, and even U.S. travelers especially if they are or have been public officials, at risk of being grabbed for trial by judges from Sierra Leone, Sudan, Iran, and other nations hostile to the rule of law, but make up the UN’s cadre of ‘international justices’.

The ICC is part and parcel of persistent plans to erase the borders of national sovereignty by globalizing governments, economies, judicial systems, peacekeeping, and so-called humanitarian escapades.

In 2004, President George W. Bush did something that had globalists seeing red: He unsigned the Rome treaty making himself an enemy of elitists all over the world and frustrating the ICC’s long term plans to prosecute the US and Israel for perceived war crimes.

As one would expect Barack Hussein Obama moved to place the US in a working relationship with the ICC:

“when Obama took office, the US began attending sessions as an “observer” in the ICC nation in 2009. In January 2010, a Justice Department review found that “informational” support for “particular investigations or prosecutions” would be legal under laws passed under Bush.

In theory, the Obama administration could choose to seek Senate ratification. But even if it did, experts say, the administration’s ability to win the 67 votes in the Senate is almost nonexistent.” (source)

Trump: Israelis should be immune from Int’l Criminal Court prosecution

It’s the second time that the Trump administration has extended its vow to protect allies from the court explicitly to Israelis.

The Trump administration has rescinded Bensouda’s visa for traveling to the US and is threatening other measures, potentially including sanctions, against ICC personnel due to its position on both the Israel case and an unrelated case against the US for alleged torture of detainees in Afghanistan.

How fascinating that God always raises up a protector for such a time as this, Esther 4:14.