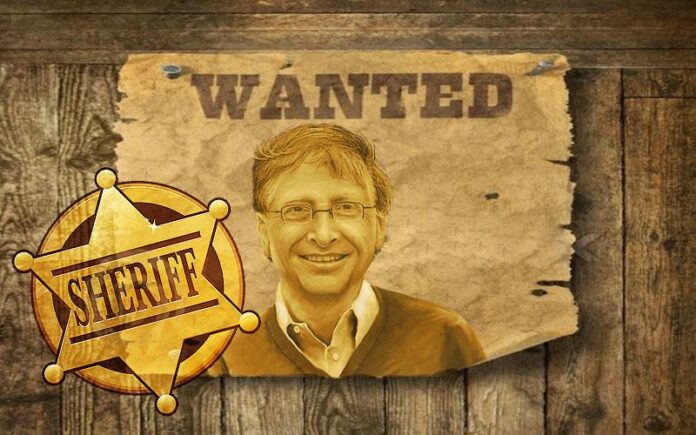 Zero Hedge: As the FDA shuts down a Bill Gates-funded COVID-testing program, an Italian politician has demanded the arrest of Bill Gates in the Italian parliament.

Sara Cunial, the Member of Parliament for Rome denounced Bill Gates as a “vaccine criminal” and urged the Italian President to hand him over to the International Criminal Court for crimes against humanity.

She also exposed Bill Gates’ agenda in India and Africa, along with the plans to chip the human race through the digital identification program ID2020.

As reported by GreatGameIndia earlier, in 2015 it were the Italians who exposed secret Chinese biological experiments with Coronavirus.

The video, which was broadcast in November, 2015, showed how Chinese scientists were doing biological experiments on a SARS connected virus believed to be Coronavirus, derived from bats and mice, asking whether it was worth the risk in order to be able to modify the virus for compatibility with human organisms. Read More …

“Then the king shall do according to his own will: he shall exalt and magnify himself above every god, shall speak blasphemies against the God of gods, and shall prosper till the wrath has been accomplished; for what has been determined shall be done. 37 He shall regard neither the God of his fathers nor the desire of women, nor regard any god; for he shall exalt himself above them all.”

Many Bible expositors conclude from the rejection of the God of his fathers that Antichrist will be a Jew. Others conclude that since he will be the final god of the Roman world he must be a Gentile. If we combine both theories we may then conclude he will be an Edomite (descendant of Esau) half Jew, half Gentile.

Today, a man who rejects the advance of a woman is in a highly regarded protected class by a growing secular world. He is not Bill Gates, but he will have the complete and total support of the kings of the earth before he destroys them:

This will be Satan’s final assault against God’s (holy) people (Jewish people and Gentiles who come to Christ during the 7 years). Daniel tells us it will be time for the Jews to finish the transgression for having denied Christ (Daniel 9:24), and to save a remnant (Jeremiah 30:7; Zechariah 12:10, 13:8 ; Romans 11:26-27).

“The Deliverer will come out of Zion,
And He will turn away ungodliness from Jacob;
27 For this is My covenant with them,
When I take away their sins.”

Italy’s Sara Cunial smells a rat, but what is prophesied to happen – will.

See more on the 70 weeks of Daniel here

Netanyahu unveils plan to ‘surround entire state with a fence’