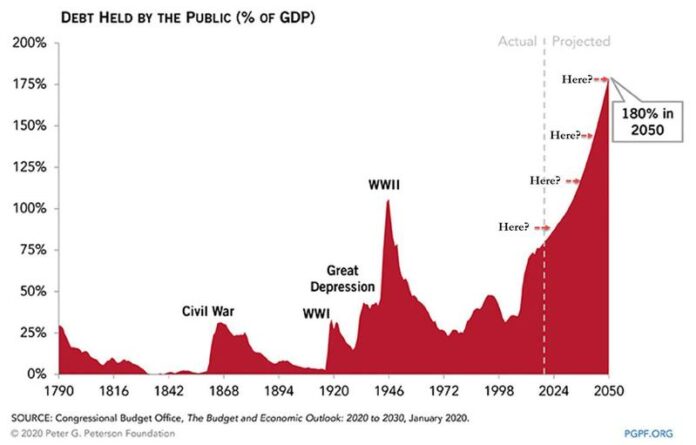 Zero Hedge: In what was perhaps the most illuminating soundbite from the Powell press conference, in response to a question about the sustainability of the US fiscal trajectory in general, and the soaring debt and deficit in particular – both of which the Fed is now directly monetizing thanks to MMT/Helicopter Money, the Fed Chairman was laconic: “this is not the time” to be concerned about debt.

Fair enough, in response we will be just as laconic and use the CBO’s latest long-term debt to GDP forecast to ask the Chairman just when will it be the time to be concerned about the Federal debt. For the benefit of the Fed Chair we have conveniently provided several possible answers.

Jerome Powell, Chair of the Federal Reserve: "The debt is growing faster than the economy. This is not the time to act upon those concerns"

Opinion: In what could possibly be the only time I agreed with Barack Obama was July 2008:

And then Obama doubled it.

But if that was all that O did, it could be chalked up to the great recession he inherited, but the really destructive thing his administration did was unleash three rounds of quantitative easing (QE).

When it became apparent that the economy was sinking into depression because of decades of the Community Reinvestment Act that pushed banks to provide mortgage loans no matter the source or income, the Treasury and Federal Reserve came up with QE or printing money.

Mortgages, both good and bad, had been packaged into AAA-rated government bonds with a yield of 5-6% and sold to banks and individuals all over the world. I know, I even owned them in my family’s account.

When the bad mortgages began to fail, the mortgage bonds crashed and the great recession began. The Federal reserve cranked up the printing press, created trillions, and bought back the toxic bonds from banks, while Barack Obama claimed credit for saving the country from depression.

It would be funny if it were not tragic. You see, the first term senator was clueless about how to run the biggest economy in the world.

Fast forward to 2020. We have a new president who is a businessman and a new Fed Chairman who was hand picked by the president. It should be better.

Jerome Powell’s comment about debt and the president’s silence means nothing has changed. QE 5 will give way to QE 6 and zero interest rates will go sub-zero. Save the economy at all costs is a recipe to fulfill Bible prophecy.

It will happen suddenly.

A quart of wheat, representing one person’s food for the day, will cost a day’s wages. But many will be forced to buy barley, a less expensive food usually used for animals. Three quarts of barley will also cost a denarius, yet the 1% will still be able to afford the luxury of oil and wine.

Excerpt from our new Bible Study “The 1% and Revelation: Do Not Harm the Oil and Wine”, coming this weekend, if all goes well, with our new website design.