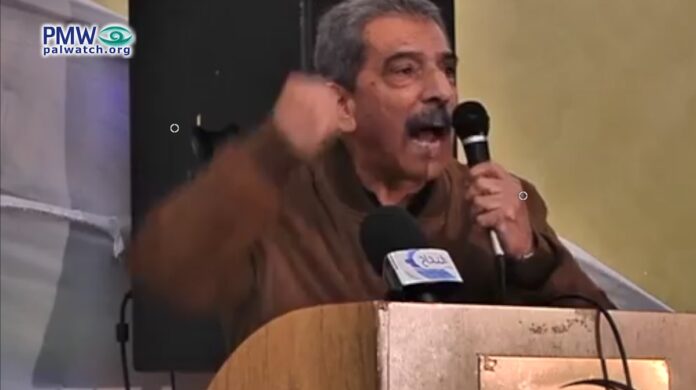 “The goal is to stop the expansion of the greedy Zionist cancer, at a time when the saying ‘From the Nile [River] to the Euphrates [River]’ is still arousing the desires of leaders in Israel.”

This Palestinian accusation is projection par excellence. As Palestinian Media Watch has documented numerous times,  it is the PA that tells its people that their goal is a “Palestine” that reaches “from the Jordan River to the Mediterranean Sea,” and includes – and destroys – all of the State of Israel. Read More …

On that day Hashem made a covenant with Avram, saying, “To your offspring I assign this land, from the river of Egypt to the great river, the river Euphrates Genesis 15:18 (The Israel Bible™)

Opinion: It is important to read the next 3 verses…

“the Kenites, the Kenezzites, the Kadmonites, 20 the Hittites, the Perizzites, the Rephaim, 21 the Amorites, the Canaanites, the Girgashites, and the Jebusites.”

These ancient Canaanite tribes brought on themselves the judgment of God, and they would be delivered into the hands of Hebrew general Joshua, when over 2 million Israelites arrived in the land that God promised Abraham and his descendants after him (Genesis 17:7-8), forever.

There is no history of any people group that compares to the Jewish people. No group has suffered more discipline at the hands of a God who over and over tells of His love for them, and no people group is at the epicenter of some of the most prophesied events in the Bible: the second coming of the Savior, and the salvation of Jacob (Jeremiah 30:7; Zechariah 8:23, 12:10; Matthew 24:15-16; Romans 11:25-27).

The land is non-negotiable. Every rock, blade of grass, every tree belongs to the Jewish people.

The PA Is correct. Israel will expand to its Genesis borders. While Israel has never possessed them in the past, when Jesus returns, the Biblical borders of Israel will be fulfilled.