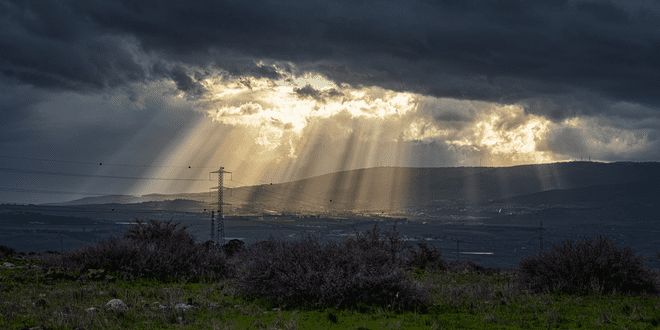 BIN: THE SCIENCE OF THE 11-YEAR SOLAR CYCLE

The solar cycle, or solar magnetic activity cycle, is a nearly periodic 11-year change in the sun’s activity measured in terms of variations in the number of observed sunspots on the solar surface. Accompanying the 11-year quasi-periodicity in sunspots, the large-scale dipolar (north-south) magnetic field component of the Sun also flips every 11 years. Solar activity can affect climate fluctuations on scales of centuries and longer.

Hashem said, “Let there be lights in the expanse of the sky to separate day from night; they shall serve as signs for the set times—the days and the years; Genesis 1:14

Rabbi Yosef Berger, the rabbi of King David’s Tomb on Mount Zion, noted that the scientists are at a disadvantage when studying the sun.

“They see the sun, all of nature, as a mechanism,” Rabbi Berger said. “There are rules of nature but they were set by the Creator. Until you understand that, understand that nature is in a relationship with Elohim, the aspect of God that is judgment and expressed through nature, then you will never completely understand nature.” Read More …

Opinion: How great is our God!

Rabbi Berger is correct, and it is impossible to understand nature or God without reading His word. Wisdom and understanding come one from one Source:

Proverbs 2:6 “For the Lord gives wisdom; From His mouth come knowledge and understanding.”

James 1:5 “If any of you lacks wisdom, let him ask of God, who gives to all liberally and without reproach, and it will be given to him.”

“Others deny that the solar cycle has any influence on the weather. The United Nations’ Intergovernmental Panel on Climate Change (IPCC) maintains that solar activity has little effect on Earth’s temperatures and would not make little difference in climate change. The IPCC warns, however, that “more research to investigate the effects of solar behavior on climate is needed before the magnitude of solar effects on climate can be stated with certainty.”

“A grand solar minimum will not save us from human-generated greenhouse gas emissions,”

Look at what happens to supposedly learned religious men when they ignore God’s word:

Pope Francis has declared a global “climate emergency”, warning of the dangers of global heating and that a failure to act urgently to reduce greenhouse gases would be “a brutal act of injustice toward the poor and future generations”.

Why A Bear Market Will Lead To A Dollar Collapse