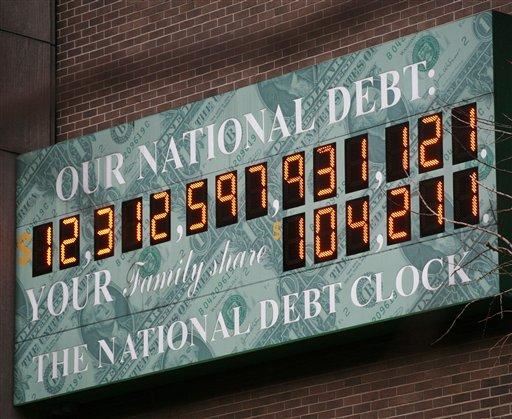 PJ Media: The current U.S. budget deficit could soon exceed a record $4 trillion. The massive borrowing is being driven both by prior budget profligacy and a hurried effort by the Donald Trump administration to pump liquidity into a quarantined America.

The shutdown has left the country on the cusp of a self-inflicted economic collapse not seen since the Great Depression. Americans may soon have to service a staggering national debt of about $30 trillion — nearly $100,000 of debt for every American.

Democrats and Republicans can blame each other, either for spending too much or for taxing too little, or both. But both sides will agree that managing such an astronomical debt requires several frightening choices. Read More …

Opinion: The US national debt will top $30 trillion this year. I’ve got bad news and I’ve got worse news.

Worse news: The $30 trillion debt does NOT count unfunded liabilities like Social Security, Medicare or Medicaid which could be as much as another $100 trillion, bringing the total debt for every man, woman, and child to $371,428.57.

Obviously there is no way to pay off even the $85 thousand number, and with that much debt, the government will be forced to print money with every future crisis. And Europe and Japan are in worse shape.

What began in 2008 was terminal. Quantitative Easing, creating new money to buy government debt to drive interest rates down, is a hopeless cycle in the same way as a dog chasing its tail, which is why I wrote the new Bible Study: “The 1% and Revelation: Do Not Harm the Oil and Wine” (on the Home page).

The world is racing towards the first Biblical economic event – hyperinflation. It can happen suddenly as a result of a nation’s currency plummeting in value. It is rather simple really, when that happens it takes more currency to buy the same goods and services.

You know the old cliche, a wheelbarrow full of money to buy a loaf of bread, which is precisely what happened in post WWI Germany.

Here is what you may not know. Germany’s financial crisis led to the rise of a man named Adolf Hitler. From 1923-33 when Hitler became chancellor, he was initially seen as a savior for Germany who promised to restore the nation to a sound economic and military power.

Winston Churchill said this in 1935:

“We cannot tell whether Hitler will be the man who will once again let loose upon the world another war in which civilization will irretrievably succumb… or whether he will go down in history as the man who restored honour and peace of mind to the great Germanic nation and brought it back serene, helpful and strong, to the forefront of the European family circle.”

Except, of course, he didn’t.

And the future financial crisis prophesied in Revelation 6:5-6 will be much the same. When a Christ-rejecting world is in the depth of financial despair, another world leader will ride into Europe on a white horse (Revelation 6:1-2) to save the day.

His name is Antichrist.