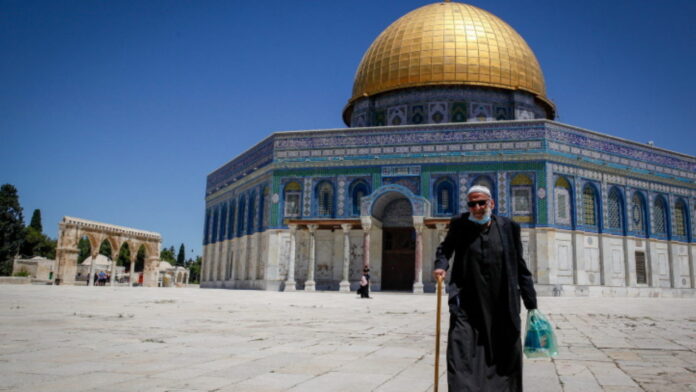 Israel Hayom: Israel and Saudi Arabia have been reportedly engaged in secret talks since last December, through American mediation, over including Saudi representatives in the Islamic Waqf Council at the Temple Mount in Jerusalem. This development has been taking place against the backdrop of US President Donald Trump’s deal of the century, and the plan to apply Israeli sovereignty in the Jordan Valley and the large settlement blocs in Judea and Samaria.

Senior Saudi diplomats familiar with the details confirmed to Israel Hayom that “these talks are sensitive and clandestine and have been conducted by small teams of diplomats and security officials from Israel, the US, and Saudi Arabia as part of the Trump administrations’ Peace to Prosperity Middle East initiative.”

According to one senior Saudi diplomat, up until a few months ago the Jordanians – who hold special and exclusive status in managing the Waqf – adamantly objected to any change in the Waqf Council. Amman however has since changed its position amid intense Turkish interference in east Jerusalem and particularly the Temple Mount. Read More …

Did you ever wonder how it came to be that Israel’s miraculous victory in 1967, uniting west and east Jerusalem (Temple Mount) for the first time in 2000 years could result in Arab control over the most holy site on earth for Jews?

Arab leaders at that time were sure that Israeli General Moshe Dayan would order the al-Aqsa Mosque to be destroyed and a Jewish Temple to be built. They, and the rest of the world, never expected what would happen next. Dayan, fearing that the fighting would never stop, decided to relinquish ownership of the Temple Mount to the Arab Waqf (religious authority) as a sign of peace and good will.

But General Dayan was a secular Jew, and therefore had no knowledge of an ancient prophecy that predicted Esau’s return to the land of Israel in the last days to reclaim his squandered birthright (Genesis 25:29-34) as foretold in Malachi 1:4

Thus says the Lord of hosts: “They may build, but I will throw down; They shall be called the Territory of Wickedness, And the people against whom the Lord will have indignation forever.”

Esau is the name of Isaac’s first-born twin, and Edom is the name of the area in southern Jordan where Esau settled after moving away from his brother Jacob. Edomites are the descendants of Esau.

Of Edom, Isaiah 63:1-3 prophesied that Esau will still be in southern Judea causing mayhem when Jesus returns to put an end to Jacob’s enemies.

Edom is right where he is prophesied to be.

See Two Trains: Israel and the Church in Prophecy Chapter 5: The Return of Jesus Christ here

Turkey’s ‘Reward’ for every Temple Mount Rioter: 4,500 Shekels a Month

WILL ANTISEMITISM DRIVE BRITISH JEWS TO MAKE ALIYAH TO ISRAEL?

New York Times Op-Ed: Why We Are on a Hunger Strike in Israel’s Prisons,...