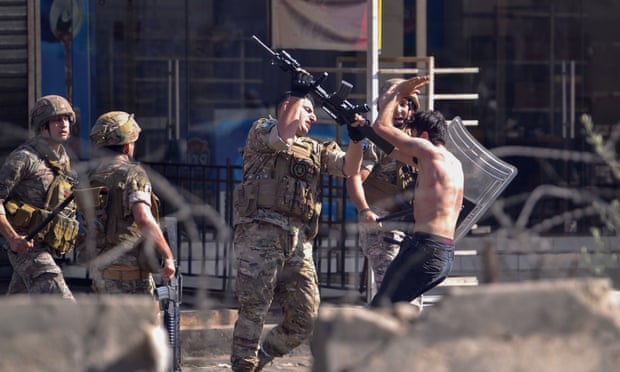 The Guardian: Hundreds of demonstrators angered by a deepening economic crisis rallied across Lebanon for a third consecutive day on Saturday, after violent overnight riots sparked condemnation from the political elite.

Protesting against the surging cost of living and the government’s apparent impotence in the face of Lebanon’s worst economic turmoil since the 1975-1990 civil war, protesters in central Beirut brandished flags and chanted anti-government slogans.

“We are here to demand the formation of a new transitional government and early parliamentary elections,” Nehmat Badreddine, an activist and demonstrator, told AFP near the Grand Serail seat of government. Read More …

Opinion: Arab Spring definition: A series of anti-government protests, uprisings, and armed rebellions that spread across much of the Arab world in the early 2010s. It began in response to oppressive regimes and a low standard of living, starting with protests in Tunisia.

People that are marginalized by tyrants revolt. Starving people revolt. We appear to have both in Lebanon. And, ancient Lebanon is represented twice in Psalm 83.

What is a given in the Middle East is that when any Arab nation falls into turmoil, it is just a matter of time before Israel is blamed.

What never stops amazing me is that the temple priest Asaph (Hebrew seer), determined 3000 years ago that southern Lebanon would be inhabited by a hostile force.

Southern Lebanon, ancient Tyre, is being inhabited by Hezbollah. Gebal is northern Lebanon.

Pope in Morocco Urges That Jerusalem be Protected for all Religions