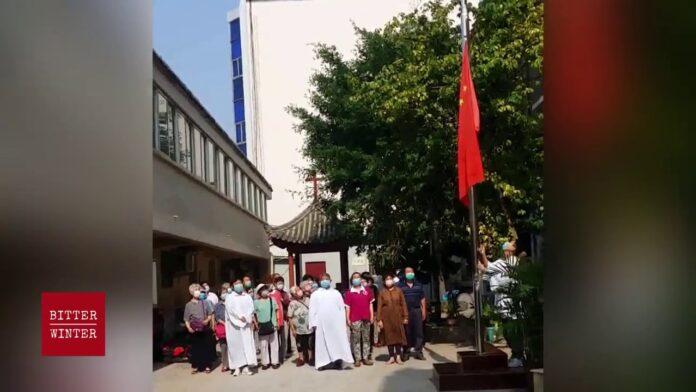 Disrn: In China, the government allowed some churches to reopen last month after coronavirus lockdowns, but only if church leaders raised the Chinese flag, declared stories of government success fighting the pandemic, and sang the national anthem, reports news outlet Bitter Winter.

The churches allowed to reopen are those run by the state, called Three-Self Churches. Government officials oversaw the ceremonies as the churches opened their doors again.

One parishioner at Guangxi Christian Church described the reopening of their church:

“The church finally reopened after five months, 147 days, or 21 Sundays,” the person said, “but instead of singing hymns to praise God, the government required us to raise the national flag and sing the national anthem, praising Xi Jinping’s ‘victory in fighting the epidemic.’ This is completely contrary to our belief.”

Opinion: What is there to say? Their pope sold them out. Pope Francis bowed to the dictator of China in 2018, allowing the dictator to select Cardinals.

Francis was warned by one of his cardinals, and ignored the warning.

Cardinal Zen Decries Vatican’s ‘Murder of the Church in China’

Cardinal Joseph Zen wrote to all his brother cardinals of the Catholic Church begging them not to sit idly by as the Church in China is “murdered,” in a letter made public this week.

Saying he was “begging on his knees,” the former bishop of Hong Kong asked his fellow cardinals: “Can we idly watch this murder of the Church in China by those who should protect it and defend it from our enemies?” in reference to recent agreements made between the Vatican with the Chinese Communist Party.

The 88-year-old bishop accused Vatican Secretary of State Cardinal Pietro Parolin of ‘a trilogy of murdering the Church in China’ and ‘manipulating the Holy Father.’
The Vatican response:

In runoff, French voters to choose globalism or self-government