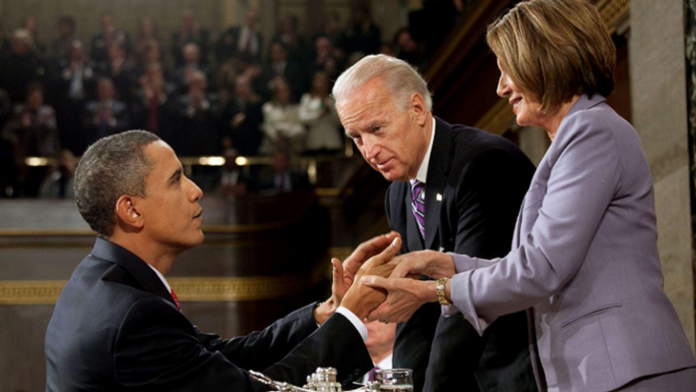 Front Page Mag: Anyone concerned with Jews and Israel should be horrified by the Democrats’ newly released 2020 platform. It directly threatens the Jewish state, employs double-talk calculated to stoke antagonism between the American left and Israel, and pays passing lip-service to opposing antisemitism, but in the gaslighting way Linda Sarsour and Ilhan Omar do; to deny it where it exists and point fingers elsewhere.

In both narrative and policy, the platform crosses over the line into deep antisemitic territory. It’s a dangerous acceleration of an approach first tested when Joe Biden was Vice President and in which he played an active role.

Upon entering office, President Obama immediately terminated the decades-old US policy ensuring “no daylight” with Israel.  Beyond leaking Israeli intelligence and sabotaging operations, Obama introduced a radical redefinition of “Two-State Solution” that inverted decades of American priorities: Palestinian statehood was not an enormously risky incentive in a process aimed at creating peace and security for all, but an unconditional matter of justice and right, wrongfully withheld by Israel.

Opinion: Barack Obama’s pro Israel policy included calling for Israel to hand strategic land it conquered in the 1967 war to enemies vowing to destroy it.

Obama’s pro Israel policy included handing the Arabs the most important piece of real estate in the world. The Temple Mount.

And Obama’s pro Israel policy included UN Resolution 2334 making it illegal for Jews to live in their ancient homeland of Judea and Samaria.

From the article: Outgoing Secretary of State Kerry announced that when Democrats were back in power they would punish Israel for its stubborn refusal to be bullied into suicidal positions “for the sake of peace.”  Biden’s platform delivers on that threat.

The platform proudly reaffirms the Iran Deal and the 2016 Memorandum of Understanding MOU.  It equates America’s liberal, democratic ally Israel with corrupt, anti-American, terrorist PA. It equates Jewish homeownership in disputed areas not with Arab homeownership in those same areas, but with Arab terror—effectively casting a Jew simply residing in a place deemed off-limits as justification for murder. It reserves this antipathy for indigenous Jewish territories in which Jews have lived for more than 3,000 years and over which the state of Israel possesses legal claims far superior to those of any other entity.

Democrats call for aid cut to Israel over annexation

Four women in the US Congress say that if Israel proceeds with further annexation plans in the occupied West Bank it would “lay the groundwork for Israel becoming an apartheid state.”

Representatives Alexandria Ocasio-Cortez, Rashida Tlaib, Betty McCollumand, Pramila Jayapal are making the claim in a letter to Secretary of State Mike Pompeo that they are circulating for signature among colleagues.

According to Politico, the letter has been signed by nine more lawmakers including Senator Bernie Sanders. more

MOST PEOPLE MISS THIS CRITICAL MESSAGE WHEN READING ISAIAH 43

Obama/Biden Want to End the Filibuster and Imperil the Republic

Terrorists in Suits in the Service of BDS

Israel calls on its citizens to leave Turkey now