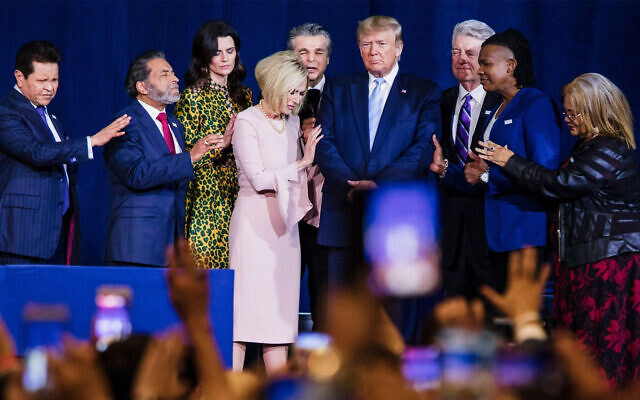 Times of Israel: Israel’s potential annexation of parts of the West Bank may not be a top election issue for American Jews, or even a top issue right now for most Israelis.

“This year, Israel is going to be the number one thing they take into the voting booth, and I’ll tell you why,” Evans told the Jewish Telegraphic Agency this week. “The one thing that unites all evangelicals concerning Israel is Genesis 12:3: ‘I will bless them that bless thee and curse them that curse thee.’ So I’ve got 73 million evangelicals on my Jerusalem Prayer Team Facebook site alone, and I know them… The only thing they believe they can do to get God to bless them is to bless the land of Israel.” Read More …

– Secretary of State Mike Pompeo stating that the State Department’s opinion established in 1978 is null and void and now the official US policy is that Jewish communities in Judea and Samaria are legal under international law.

1. The same week in late January that the “Deal of the Century” was presented to the world, which includes a Palestinian state inside of Israel, COVID19 came to our shores and eventually became much worse in NYC than anywhere else.
2. The same day that the American-Israel plan to carve out a foreign nation’s territory in God’s land was presented to Israelis in map form, isolating at least 25 Israeli settlements, the Minneapolis riots began.”

The one policy that the president could trip over is dividing God’s land.

The November election is unprecedented on so many levels. The Democrat party has made no secret that Ilhan Omar and Rashida Tlaib will hold power over financial support for Israel. Obey our demands over annexation or any other progressive order or lose financial support.

What none of Israel’s enemies, domestic and foreign, seem to realize is that after every miraculous Israeli victory since 1948, Israel has all the support it needs. The loser, if money is cut off, will be the nations doing the withholding (Genesis 12:3).