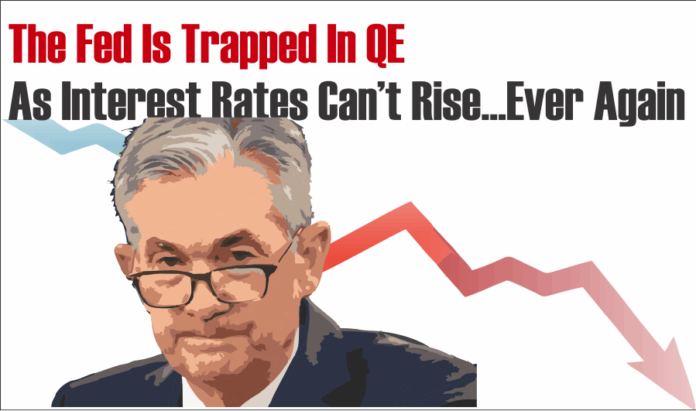 Talk Markets: Since the onset of the pandemic, the Fed has entered into the most aggressive monetary campaign. Its goal was to bolster asset markets to restore confidence in the financial system. However, the trap is the Fed is in a position where they can never stop QE as interest rates can’t rise ever again.

As we discussed previously, Jeremy Siegel already declared the end to the 40-year bond bull market.

“History has shown that this liquidity has to come out somewhere, and we’re not going to get a free lunch out of this. I think ultimately, it’s going to be the bondholder that’s going to suffer. That’s certainly not the popular notion right now.” – J. Siegel via CNBC

While “deflation” is the overarching threat longer-term, the Fed is also potentially confronted by a shorter-term “inflationary” threat.

The “unlimited QE” bazooka is dependent on the Fed needing to monetize the deficit to support economic growth. However, if the goals of full employment and economic growth quickly come to fruition, the Fed will face an “inflationary surge.” Read More

Opinion: An inflation surge on top of an already tumultuous Covid-19 economy will put the central banks in a precarious position.

Inflation surged to near 13% in 1976-1980 when Jimmy Carter was president. Just before leaving office, Carter appointed Paul Volker as Federal Reserve chief, and in 1981 Ronald Reagan became president and reappointed Volker for another term.

Since then inflation has been has been largely hidden in asset inflation and constant revisions on how consumer prices are measured. In addition there have been short term  inflation spikes popping up in oil and various commodities.

Bible prophecy for the last days indicates an even worse economic dilemma. Hyperinflation, or out of control sudden inflation, that will take over the global economy likely due to a major currency (euro/US Dollar) devaluation.

What could cause that? Massive quantitative easing (QE), or printing trillions of new money to sustain economic growth with no thought to the consequences.

See our paper “The 1% and Revelation: “Do Not Harm the Oil and Wine” here

To Our Readers: Google Updates