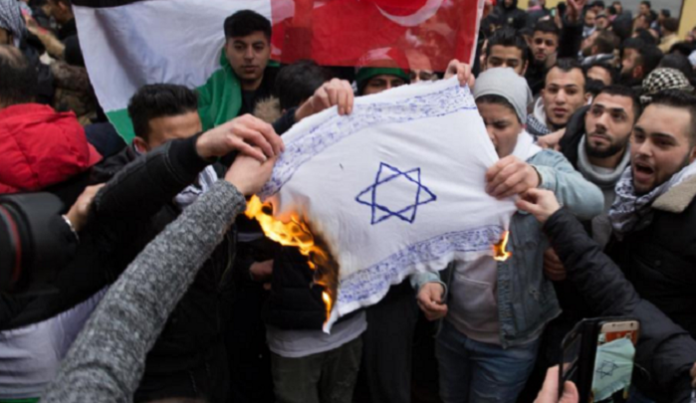 Jihad Watch: The World Zionist Organization (WZO) is “working on a plan to bring hundreds of thousands of French Jews to Israel.” The population of Jews in France is roughly 453,000.

Here’s why, according to WZO Vice-Chair Yaakov Hagoel: “Anti-Semitism is increasing and France is surrendering to jihad.”

“The worsening economic situation, and the growth of radical Islam are creating a one-time opportunity to break down bureaucratic barriers and bring the Jews of France to Israel.”

The WZO’s plan follows increasing violent Islamic antisemitism that as yet has been largely being ignored in the EU. Read More …

The Weimar Republic, Germany’s government from 1919 to 1933, fell into hyperinflation  that led to the rise of the Nazi Party. Starving Germans brought in Adolf Hitler.

Elsewhere in the EU:

Is the writing on the wall for the European Union?

“And this is the inscription that was written”

This is the interpretation of each word. MENE: God has numbered your kingdom, and finished it; TEKEL: You have been weighed in the balances, and found wanting; PERES: Your kingdom has been divided, and given to the Medes and Persians.” Daniel 5:25-28

The EU is pandering to Islam. Boycott Divest and Sanction, or economic jihad against the Israeli economy, combined with condemnation of Israel annexing its heartland will bring divine judgment.

“The ten horns are ten kings
Who shall arise from this kingdom.
And another shall rise after them;
He shall be different from the first ones,
And shall subdue three kings” Daniel 7:24

The Missing Billions of the Palestinian Authority