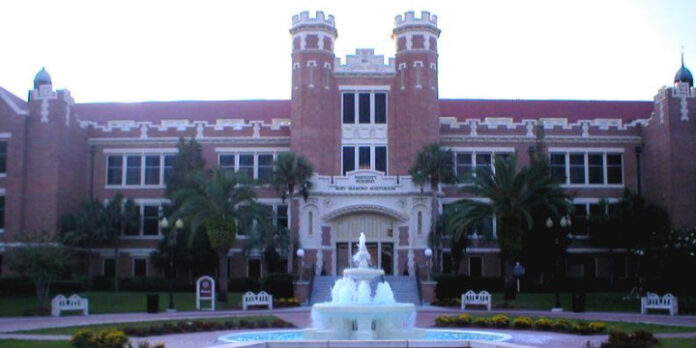 Algemeiner: A Florida State University student government resolution that sought to combat antisemitism and ensure the empowerment of Jewish students on campus was successfully filibustered last week by the Student Senate, whose president has himself been accused of antisemitism.

Ahmad Daraldik — who is Palestinian-American — recently replaced the previous president of the Student Senate who was expelled for criticizing the Black Lives Matter movement.

It was later discovered that Daraldik had made numerous offensive comments online, such as “stupid Jew” and “f**k Israel.” In addition, a web page belonging to Daraldik openly minimizes the Holocaust, calling it simply an “atrocity” and comparing Israel unfavorably to Nazi Germany.

A bid to remove Daraldik gained a majority vote, but fell short of the two-thirds majority. Read More …

Outrage has erupted at Florida State University after the new Student Senate president was found to have made racist and antisemitic statements online, including comparing Israel to Nazi Germany.

The Catholic is expelled in favor of a Palestinian. What both articles neglected to show is that Ahmad Daraldik is member of Students for Justice in Palestine (SJP) a rapidly growing anti-Semitic college hate group whose patron is the Muslim Brotherhood’s military wing Hamas.

FSU Students for Justice in Palestine June 7 at 3:46 PM ·

“We are so proud to announce that our very own, Ahmad Daraldik, has been voted the new FSU Senate President. ❤️ Ahmad is a servant of the people through and through and we are ready to protect him at all costs 😭 Mabrouk!!

While the woke world looks for injustice in statues, sports team names, skin color, and boycotting Goya foods, the hatred that will bring the whole world to conflict is being ignored.

“Then they will deliver you up to tribulation and kill you, and you will be hated by all nations for My name’s sake. 10 And then many will be offended, will betray one another, and will hate one another.” Matthew 24:9-10