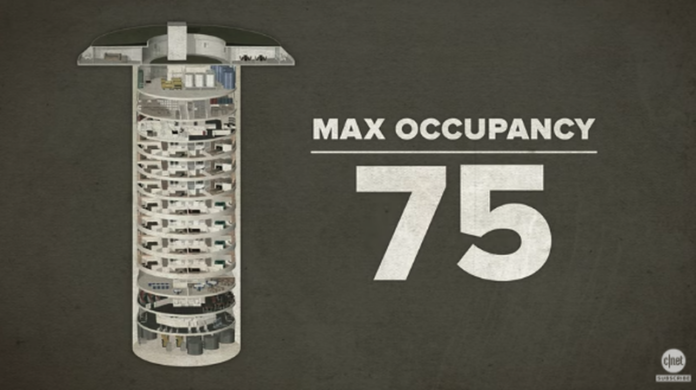 Zero Hedge: When it comes to doomsday bunkers – we might have found the ‘Cadillac’ of underground shelters for the superrich to ride out the virus pandemic and social-economic implosion of America. It’s called the Survival Condo, buried 200 feet underground in the middle of rural Kansas, several hundred miles from Kansas City, is a newly outfitted Cold War nuclear silo that houses underground condos that can survive a 12-kiloton nuclear warhead.

Condos start at $1 million, plus an extra $2,500 per month condo fee to cover expenses in the bunker, such as food, ammo, electricity, and internet connectivity.

CNET spoke with Larry Hall, the owner of the Survival Condo, who said the bunker is 15 floors and buried 200 feet underground.

“Beneath the dome, the cylindrical silo houses a further 14 floors — the top three floors are where you’ll find the mechanical rooms, medical facilities and a food store (complete with a full hydroponics and aquaculture setup), followed beneath by seven levels of residential condos. At the bottom, the final four floors house the classroom and library, a cinema and bar, and a workout room (with a sauna),” CNET said. Read More …

Opinion: The ultimate ‘prepper pad’ for post-tribbers and the non-believing 1% to ride out the apocalypse in luxury.

The facility has a maximum occupancy of 75 people that can survive for about five years. Here are some of the condo features:

There’s also a shooting range and pool to keep occupants trained for the apocalypse.

How innovative and foolish at the same time. The residents have to depart the bunker in 5 years, and the tribulation (the time of trouble for Jacob, Jeremiah 30:7) when it comes, will last 7 years, with the worst part the last 3.5 (Matthew 24:21).

Residents could be forced to leave as the worst part of the tribulation is upon them.

What the buyers of these bunkers don’t know is that when the Biblical apocalypse is over, there will be nothing to go back to.

Revelation 16: The last set of 21 Judgments, the most severe of them all, are poured out on a Christ-rejecting world.

The destruction of Babylon, the symbol for wealth excess, will have come. And the enormous wealth owned by the 1% is no more:

“And the merchants of the earth will weep and mourn over her, for no one buys their merchandise anymore.” Revelation 18:11

See our paper “The 1% and Revelation” here

Who will control Gaza forces?