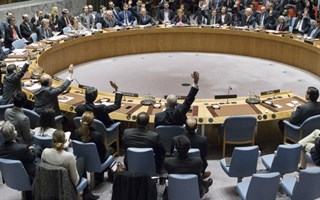 One News Now: The influential and corrupt United Nations has been viewed for generations as the probable leader of a future one-world government, and now an eye-opening speech is laying out that power-grabbing vision for the world to see.

“Now is the time for global leaders to decide,” UN Secretary-General Antonio Guterres proclaimed in a July 18 speech that suggested the COVID-19 pandemic has demonstrated the “fragility” of a world where worldwide inequalities have been exposed.

He went on to urge countries to support a “New Global Deal” that is based on “fair globalization” and the rights and dignity of every human being. Read More …

Godless men are busy laying the planks for the platform of the final world dictator:

The secular UN is knowingly preparing to receive a global leader. What the UN globalists do not know is that the Bible says one is coming, but he will not be what they hope for.

“And in the latter time of their kingdom, when the transgressors are come to the full, a king of fierce countenance, and understanding dark sentences, shall stand up. Daniel 8:23

This king will have supernatural power. When Satan offered Jesus all the kingdoms of the world on the condition He would worship him, Jesus rejected the offer (Luke 4:1-13). When the same offer is made to Antichrist, he will accept it.

What follows is tribulation (Matthew 24:21), when the hoped for king of the secular world turns on them.

“For then there will be great tribulation, such as has not been since the beginning of the world until this time, no, nor ever shall be.”

(It is interesting that the article quotes Jan Markell, whose monthly newsletter “Understanding the Times” in many ways parallels our website)

Obama: Important to give hope to Israelis and Palestinians