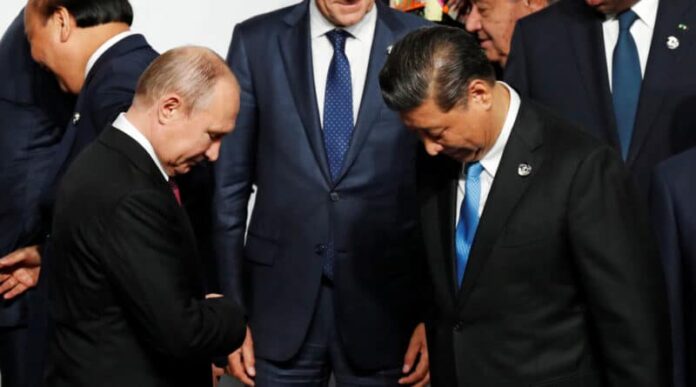 RT: After years of talking about abandoning the US dollar, Russia and China are doing it for real. In the first quarter of 2020, the share of the dollar in trade between the countries fell below 50 percent for the first time.

To give an indication of the scale of the adjustment, just four years ago the greenback accounted for over 90 percent of their currency settlements.

According to Moscow daily Izvestia, the share has dropped to 46 percent, tumbling from 75 percent in 2018. The 54 percent of non-dollar trade is made up of Chinese yuan (17 percent), the euro (30 percent), and the Russian ruble (7 percent). Read More …

The Chinese yuan was approved as one of the world’s exclusive currencies on Monday, a milestone decision by the International Monetary Fund that highlights the country’s rising financial and economic weight.

For the first time in over 15 years, the list of currencies comprising the Special Drawing Right (SDR) basket has been changed. It was determined the Chinese yuan met all existing criteria. source

(Chinese yuan and renminbi are interchangeable. Yuan is a unit of renminbi)

With that approval, the Chinese Central Bank began pushing for Special Drawing Rights (SDR) a basket of five currencies (the U.S. dollar, the euro, the Chinese renminbi, the Japanese yen, and the British pound sterling) to replace the dollar.

The move is a decoy.

The SDR cannot replace the US dollar as world reserve currency since there is no free market to exchange them. The SDR is a creation of the International Monetary Fund (IMF) and by their own definition:

“The SDR is neither a currency nor a claim in the IMF. Rather it is a claim on the freely usable currencies of IMF members.” source

So why does China promote the SDR? Because if the dollar were to fail as the global currency, none of the world’s remaining exclusive currencies are capable of taking its place on their own. China could then move to internationalize the renminbi and push to have it accepted as the world reserve currency.

With Russia’s cooperation in abandoning the US dollar, China has become a major buyer of gold to strengthen the renminbi.

So what does Bible prophecy say?

While there is no prophecy that indicates global economic domination under China, Revelation 13:16-17 does call for complete control of the global economic system, even buying and selling, under the False Prophet, second in command to the beast (Revelation 13:1) of the revived Roman Empire. Antichrist.

“He causes all, both small and great, rich and poor, free and slave, to receive a mark on their right hand or on their foreheads, 17 and that no one may buy or sell except one who has the mark or the name of the beast, or the number of his name.”