Home anti-Semitism Fatah’s threat: “The day you extend your hand, we’ll cut it off” 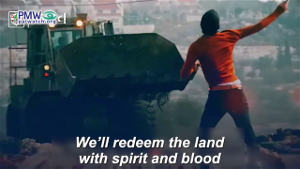 Palwatch: In this music video produced by Fatah, Abbas’ party threatens Israel that Palestinians will “obliterate” “whoever approaches my land”.

Opinion: Hatred this deep is the first clue as to who these Arab people descended from. Maniacal desire for the land is the second. After Jacob received his father Isaac’s blessing (Genesis 27:28-29 NIV) of the land …

“May God give you heaven’s dew
and earth’s richness— (Jerusalem)
an abundance of grain and new wine.
29 May nations serve you
and peoples bow down to you.
Be lord over your brothers,
and may the sons of your mother bow down to you.
May those who curse you be cursed
and those who bless you be blessed.” Genesis 27:28-29 NIV

… Esau begged for a second chance:

“Your dwelling will be
away from the earth’s richness,
away from the dew of heaven above.
40 You will live by the sword
and you will serve your brother.
But when you grow restless,
you will throw his yoke
from off your neck.” Genesis 27:39-40 NIV

Esau’s anguish over losing the title deed to the land of promise has echoed throughout history in his descendants.

“Esau held a grudge against Jacob because of the blessing his father had given him. He said to himself, “The days of mourning for my father are near; then I will kill my brother Jacob.” Genesis 27:41

That the threat would continue to the last days was prophesied in Malachi 1:4

“Even though Edom (Esau) has said,
“We have been impoverished,
But we will return and build the desolate places”

God has other plans…

“They may build, but I will throw down;
They shall be called the Territory of Wickedness,
And the people against whom the Lord will have indignation forever.” Malachi 1:5