Home Antichrist Fed Is Planning To Send Money Directly To Americans In The Next...

Zero Hedge: The Fed is desperate to ignite broad inflation as that is the only way the countless trillions of excess debt can be eliminated and yet it has so far failed to do so.

The Fed’s failure to reach its inflation target has sparked broad criticism from the economic establishment, even though as we showed in June, deflation is now a direct function of the Fed’s unconventional monetary policies as the lower yields slide, the lower the propensity to spend.

In other words, the harder the Fed fights to stimulate inflation, the more deflation and more saving it spurs as a result.

In short, ever since the Fed launched QE and NIRP, it has been making the situation it has been trying to “fix” even worse, all the while blowing a massive asset price bubble. Read More …

Opinion: It has to blow sometime. The asset bubble that is. 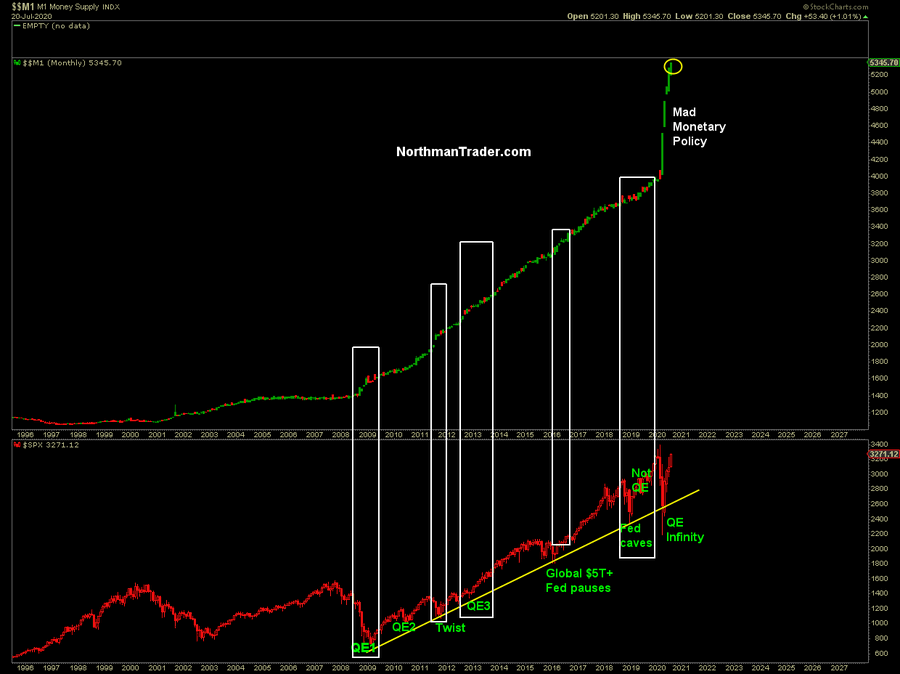 Take a look at the effects that QE has on the stock market beginning in 2009:

From the article: “It took Congress too long to get money to people, and it’s too clunky. We need a separate infrastructure. The Fed could buy the bonds quickly without going to the private market. The bonds will be on the asset side of the Fed’s balance sheet; the digital dollars in people’s accounts will be on the liability side.”

And that, in a nutshell, is how the Fed will stimulate the economy in the next crisis in hopes of circumventing the reserve creation process: it will use digital money apps (which explains the Fed’s recent fascination with cryptocurrency and digital money), to transfer money directly to US consumers.

Cryptocurrency issued by central banks has been in the planning stage for over two years. It was nearly implemented by the government on March as a means to get stimulus money to massively unemployed Americans.

All that will be needed for a complete re-set of the global economy is a hyper-inflationary crash from which there will be no escape, Revelation 6:5-6.