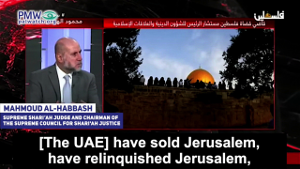 Opinion: While the hatred Esau has for Jacob is from time immemorial, the hatred Islam has for Judaism is much more recent, but connected by the same grand conspirator.

“After a lot of thinking, analysis, research, and writing, I discovered that Jew -hatred in Islam is an essential foundation to the Islamic belief system that Muslims cannot seem to be able to rid themselves of. Jew-hatred masks an existential problem in Islam. Islam is terrified of the Jews, and the number-one enemy of Islam is the truth, which must be constantly covered at any cost.

It does not matter how many Muslim men, women, and children die in the process of saving Islam’s reputation. The number-one duty of Muslims is to protect the reputation of Islam and Mohammad. But why would a religion burden its followers like that? This is why:

When Mohammed embarked on his mission to spread Islam, his objective was to create a uniquely Arabian religion, one created by an Arab prophet, which reflected the Arabian values and culture. Yet to obtain legitimacy, he had to link it to the two previous Abrahamic religions, Judaism and Christianity.

He expected the Jewish tribes who lived in Arabia to declare him their Messiah and thereby bring him more legitimacy with Arabs, especially with his own tribe in Mecca, the Quraish.  Because his own tribe had rejected and ridiculed him, Mohammed needed the approval of the Jews, whom he called the people of the book. But the conversion of Jews to Islam was part of the scenario that Mohammed had to accomplish in order to prove to Meccans that they had made a mistake by rejecting him.

That was one of the reasons Mohammed chose to migrate to Medina, a town that had predominantly been settled by Jewish tribes and a few impoverished Arabs who lived around the Jews. The Jews allowed Mohammed to move in.  At the beginning, the Koran of Mecca was full of appeals to the Jews, who were then described as “guidance and light” (5:44) and a “righteous” people (6:153-154), who “excelled the nations” (45:16). But when the Jews rejected the appeasement and refused to convert to Islam, Mohammed simply and completely flipped.

The Quran changed from love to threats and then pure hatred, cursing, and commandments to kill Jews.  Rejection by the Jews became an intolerable obsession with Mohammed.

Mohammed never got over his anger, humiliation, and rejection by “the people of the book” and went to his grave tormented and obsessed that some Jews were still alive.  On his deathbed, Mohammed entrusted Muslims to kill Jews wherever they found them, which made this a “holy commandment” that no Muslim can reject.”