Home Bible prophecy Jared Kushner: The First Time Israel has Agreed to a Map of... 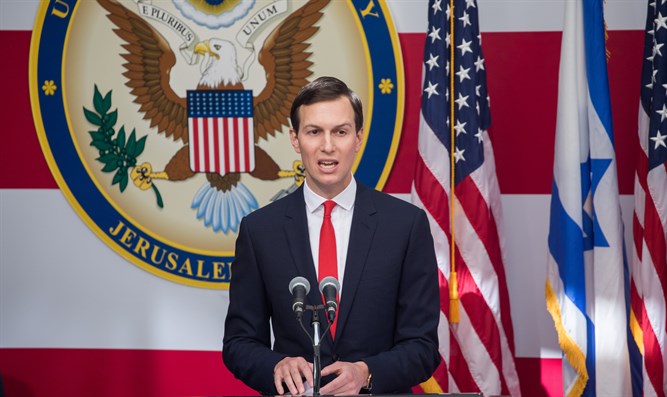 Addressing Israeli reporters, Kushner said that “Israel has made a very generous proposal for the establishment of a Palestinian state, including an exchange of territories. The understanding that this is the situation has enabled the breakthrough that led to the current agreement.”

“The president laid out his vision for peace in January this year … and this is the first map ever agreed to by one of the parties publicly put out in a peace negotiation. We got Israel to agree to negotiate on the basis of the process of division, they agreed to the map and agreed to move forward on a Palestinian state. This was a major breakthrough that changed the view of a lot of people in the region about Israel’s seriousness to actually make concessions to resolve this longstanding conflict,” Kushner said, adding the countries in the region also questioned why the Palestinian Authority boycotted the economic conference in Bahrain.

“There is a generous offer of a state and an exchange of territories, and we offer the Palestinians a return to the table,” he said. Read More …

“We cannot be a part of dividing God’s land. As long as we are, we will be judged and pay a price. For instance.

1. The same week in late January that the “Deal of the Century” was presented to the world, which includes a Palestinian state inside of Israel, COVID19 came to our shores and eventually became much worse in NYC than anywhere else.
2. The same day that the American-Israel plan to carve out a foreign nation’s territory in God’s land was presented to Israelis in map form, isolating at least 25 Israeli settlements, the Minneapolis riots began.”

There are consequences to violating God’s warnings and Jared Kushner, President Trump’s son-in-law, who claims to be a religious Jew, should know better:

Can all that be undone over a dividing Israel with a Palestinian state?

“For behold, in those days and at that time,
When I bring back the captives of Judah and Jerusalem,
2 I will also gather all nations,
And bring them down to the Valley of Jehoshaphat;
And I will enter into judgment with them there
On account of My people, My heritage Israel,
Whom they have scattered among the nations;
They have also divided up My land.” Joel 3:1-2

Yes, I think it can.