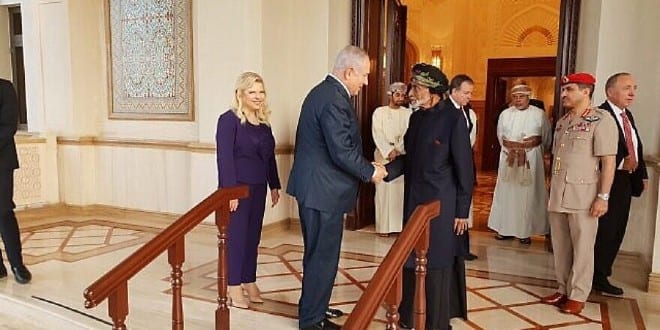 Israel 365: A historic ceremony was held on the White House lawn on Tuesday: an agreement, brokered by the Trump administration, normalizing relations between Israel and two Arab nations, Bahrain and the United Arab Emirates, was signed. The agreement, the fulfillment of prophecy, was appropriately named the Abraham Accords.

In a manner hinting at the prophesied beating of swords into plowshares, the agreement called for “the further development of friendly relations meets the interests of lasting peace in the Middle East and that challenges can only be effectively addressed by cooperation and not by conflict.”

The agreement explained the Biblical roots of the name:

“Recognizing that the Arab and Jewish peoples are descendants of a common ancestor, Abraham, and inspired, in that spirit, to foster in the Middle East a reality in which Muslims, Jews, Christians and peoples of all faiths, denominations, beliefs and nationalities live in, and are committed to, a spirit of coexistence, mutual understanding and mutual respect…” Read More …

Opinion: Whoa, Nellie. This is what happens when the traditions of men conflict with God’s word the Bible. In this case we are seeing Jewish tradition which, like Catholic tradition, is warned against in the New Testament (Matthew 15:3; Mark 7:7-8; Colossians 2:8).

That the writer of the article speaks of a spirit of coexistence among Muslims, Jews and Christians, is nowhere to be found in the apocalyptic books of God’s word, Daniel and Revelation:

In fact Daniel 9:27 indicates that one of these peace treaties will be confirmed by Antichrist and will ultimately fall apart when the man of sin breaks his covenant with Israel after 3.5 years, cancels animal sacrifice, and attempts to destroy every Jew on earth.

Next, the article points to disparate Abrahamic bloodlines living in mutual understanding and mutual respect:

Abraham: Ishmael – The son of the flesh (Galatians 4:23) born to a Jewish father and Egyptian mother will perish in the Psalm 83 war.

It is all there in God’s word, so let Him tell you…

‘If it is marvelous in the eyes of the remnant of this people in these days,
Will it also be marvelous in My eyes?’
Says the Lord of hosts.

7 “Thus says the Lord of hosts:

See “Two Trains: Israel and the Church in Prophecy” here