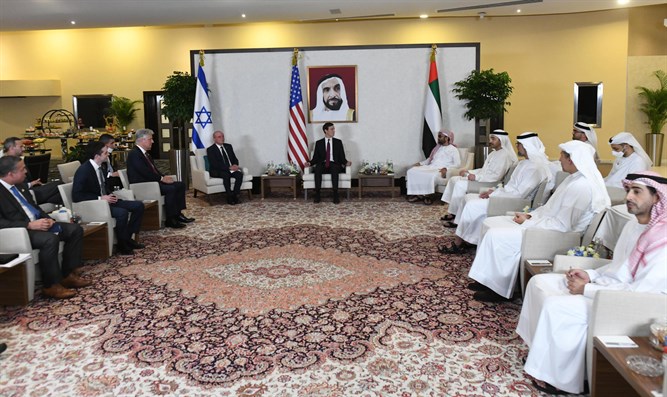 Jewish Press: This week, we witnessed a symbol of perhaps the greatest step forward in world peace for decades. The first-ever direct passenger flight from Israel to the United Arab Emirates flew down the length of Saudi Arabia’s airspace. After Egypt in 1979 and Jordan in 1994, the UAE has become the third Arab state to normalise relations with the State of Israel under the new Abraham Accord.

Next month, the 2020 Nobel Peace Prize winner will be announced in Oslo. Will it go to the architects of the Abraham Accord, a momentous achievement in itself, and also a major development in a regional geopolitical realignment that is not only good for peace and prosperity in the Middle East but in the world?

We knew what the answer would be to that question even before it arose. (Those who point out the deadline for 2020 nominations has passed need not expect to see it in 2021 either.) Read More …

Opinion: If Barack Obama had done what Donald Trump has done in the ME, he would have his 2nd Nobel Peace Prize. The interesting part is this time it would be a better fit.

“And he shall confirm the covenant with many for one week” Daniel 9:27.

Daniel tells us that Antichrist will be the first to confirm peace in the Middle East, and that the terms of the agreement will be for 7 years (Hebrew, week of years). So far there is no time frame being discussed.

The secular left has no interest in peace in the Middle East, opting instead for condemning Israel and sympathizing with the Arabs.

The religious right is mostly silent due to a lack of understanding of Bible prophecy, opting instead for a two-state solution that will divide Jerusalem and bring judgment (Joel 3:1-2).

Those in the middle could care less.

“Thus says the Lord God: ‘This is Jerusalem; I have set her in the midst of the nations and the countries all around her” Ezekiel 5:5.

I sometimes try to imagine Jesus in the 3rd heaven watching the nations that surround the tiny nation that He loves.

He who sits in the heavens shall laugh;
The Lord shall hold them in derision.
5 Then He shall speak to them in His wrath,
And distress them in His deep displeasure:
6 “Yet I have set My King
On My holy hill of Zion.” Psalm 2:4-6

The holy hill is not Rome, New York, or London, but Jerusalem.

The scene above is the second coming of Jesus Christ, and no matter who the Nobel people honor, lasting peace in the world will not come until the Prince of Peace returns.