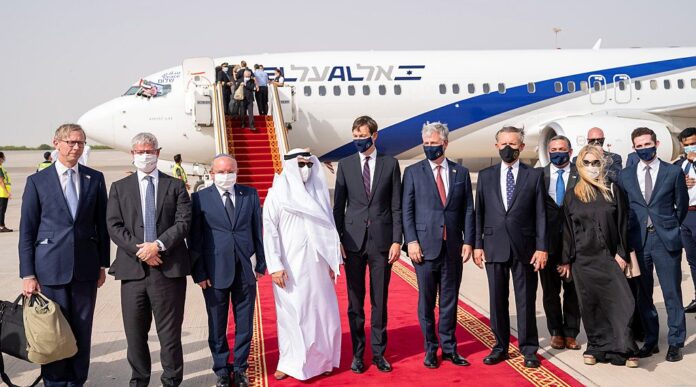 Israel Hayom: Hours after Israeli officials arrived on a historic flight from Tel Aviv to Abu Dhabi to finalize a peace deal, Prime Minister Benjamin Netanyahu said in a news conference on Monday that he invited a delegation from the United Arab Emirates to visit Israel.

The invitation, Netanyahu said, was extended by his national security adviser, Meir Ben-Shabbat, who is heading a group of senior Israeli officials now in Abu Dhabi to draft the pact marking open relations between Israel and the Gulf state.

Netanyahu said that he had asked the Israeli officials to complete the negotiations as quickly as possible so that the third Israeli-Arab peace accord could take effect. Read More …

Opinion: Headline after headline heralds the Abraham Accord, the peace between Ishmael and Jacob. If you read the first book of the Bible however, not only will that not happen …

“He shall be a wild man;
“His hand shall be against every man,
And every man’s hand against him.
And he shall dwell in the presence of all his brethren.” Gen. 16:12

… but enmity between Esau and Jacob will be the cause of the final wars of this age.

“So Esau hated Jacob because of the blessing with which his father blessed him, and Esau said in his heart, “The days of mourning for my father are at hand; then I will kill my brother Jacob.” Gen. 27:41

Once Antichrist is revealed to the world (Rev. 13:1-4), events will accelerate. The great hero who confirmed peace treaties between Israel and ‘many‘ neighbors (Daniel 9:27) will demand worship …

“… And on the wing of abominations shall be one who makes desolate,
Even until the consummation, which is determined,
Is poured out on the desolate”

It is then that the Jews are to flee …

It is in the mountains of Mt Seir (Petra), Esau’s ancient abode, that Jesus destroys Israel’s enemies (Obadiah 1:18; Isaiah 63:1-3) and brings Jacob to redemption …