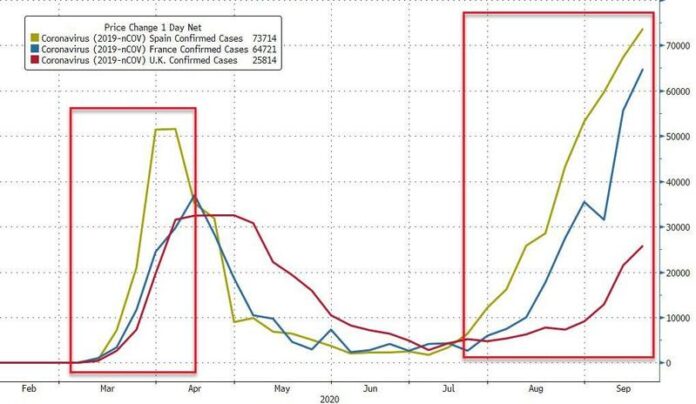 Zero Hedge: The rise in Covid-19 cases in countries like France and Spain has increased the risk of new lockdowns.

Governments should understand by now that shutting down the economy is highly inefficient and devastating for jobs and business solvency. However, as we have seen in Spain, many governments simply decide to start new lockdowns in order to show that they are taking aggressive measures, even knowing that these generate more negative effects and have no real impact on preserving health.

Instead of looking at the examples of South Korea, Taiwan, Sweden or Austria, where simple but effective measures have resulted in better management of the health crisis, some European governments are ignoring the economic and social long-term disaster that closing down the economy has created and seem prepared to repeat the past mistakes. Read More …

Global debt surged to a record $258 trillion in the first quarter of 2020 as economies around the world shut down to contain the coronavirus pandemic, and debt levels are continuing to rise, the Institute for International Finance said on Thursday in a report..

It doesn’t take an economist to come to the conclusion that at some point financing debt by selling bonds to other countries will cease, and central banks will simply print the new money to keep economies going.

While the world frets over Black Lives Matter, Antifa, the US election, and climate sustainability, the debt monster grows by the second.

The voices of the 1% calling for a solution. At the Davos meeting last January, Prince Charles narrated this video:

“We must put nature at the heart of how we operate”. Global cooperation is a necessity for a sustainable future. A Re-Volution is needed and with it new global leadership.

Based on the great prophet Daniel, that leadership will come from the revived Roman empire which is waiting for one man:

‘The fourth beast shall be a fourth kingdom on earth …

Which shall be different from all other kingdoms,
And shall devour the whole earth,
Trample it and break it in pieces.

in need of a complete overhaul into 10 divisions …

The ten horns are ten kings
Who shall arise from this kingdom.

… and a new global leader

And another shall rise after them;
He shall be different from the first ones,
And shall subdue three kings. Daniel 7:23-24