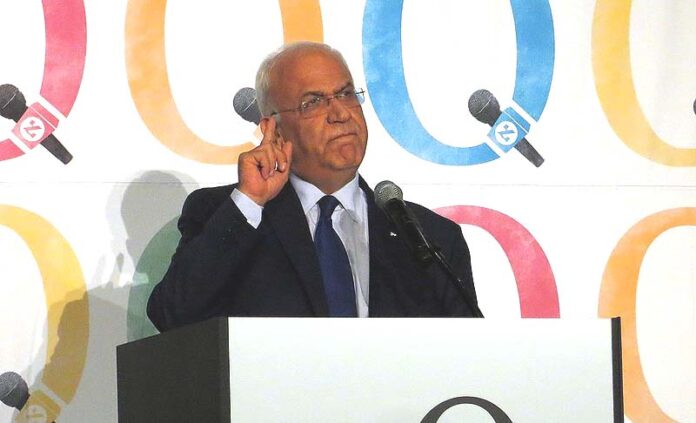 Jewish Press: The sellout of academic values is exemplified by Harvard’s acceptance of $1.6 million from the “State of Palestine.” Could it be a coincidence that, in a case study of the university’s decline in standards, it hired Saeb Erekat, the Palestinians’ chief negotiator, to mentor students and give virtual seminars as a fellow in The Future of Diplomacy Project at the Kennedy School’s Belfer Center for Science and International Affairs?

He is among the new fellows who faculty chair Nicholas Burns said “will strengthen our capacity to learn the lessons of effective diplomacy and statecraft.”

One hardly knows where to begin in digesting this astounding example of moral and academic myopia. Read More …

Opinion: Erekat is parroting Mahmoud Abbas who tried selling this Canaanite fable in 2019

Canaanites: Wicked and idolatrous descendants of Canaan, grandson of Noah, son of Ham. The ‘land of Canaan’ occupied the area that is now Lebanon and Israel, and parts of Jordan and Syria (Gen. 10:15-20). Canaanites refers to all the inhabitants of the land, encompassing many “ites”.

Erekat who is fond of saying “I will never recognize Israel as a Jewish state,” is now teaching at one of the most expensive (and formerly) prestigious universities in the US. As if leftism wasn’t deep enough in Cambridge.

A more accurate ancestry for Saeb Erekat (Palestinian), is found in the lineage of Amalek, a descendant of Esau …

“Now Timna was the concubine of Eliphaz, Esau’s son, and she bore Amalek to Eliphaz …” Genesis 36:12

Of Amalek God swore “ …the Lord will have war with Amalek (Esau) from generation to generation.” Exodus 17:16

Whose lineage would return in the last days “Even though Edom has said, “We have been impoverished, But we will return and build the desolate places”

“They shall be called the Territory of Wickedness,
And the people against whom the Lord will have indignation forever.” Malachi 1:4

We created a video to track the descendants of Esau and Amalek. The First Terrorist follows the Biblical record …

I’m pretty sure Harvard will not cover any Biblical ancestry.