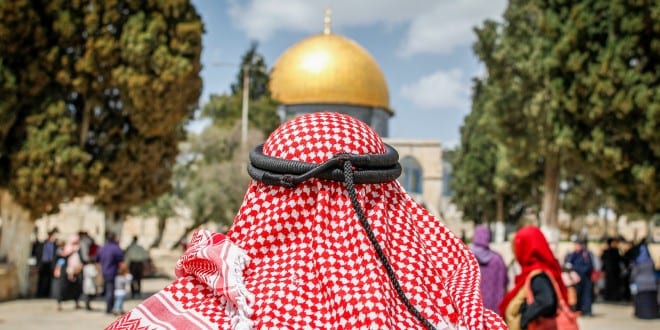 Breaking Israel News: The agreement to normalize relations between the United Arab Emirates and Israel has raised the unprecedented possibility that in the near future, large numbers of Muslim pilgrims will be coming to pray on the Temple Mount.

Ironically, the Israeli government is welcoming them with open arms but the Palestinian religious leadership has already issued a Fatwa (religious ruling) banning Muslims from countries that have signed agreements with Israel from entering the silver-domed al-Aqsa Mosque.

The arrival of the true Bnei Yishmael to the Temple Mount has end-of-days implications. The Zohar Hadash (Balak 68b) describes a process that will begin in the 274th year of the sixth millennium.

This works out to be the year 5774 in the Hebrew calendar which began in September 2013. The Zohar predicts that the “Sons of Ishmael” will make war against the Messiah, and will “come and bow down before God at the holy mountain in Jerusalem”.  The text specifically uses the name of the God of the Jews, and not a generic term or the expression used for non-Jewish worship. This prediction of the Zohar predicts that the Arabs will worship the Jewish God on the Temple Mount and, in fact, that does seem to be what is happening.

The Zohar goes on to say that Edom will rule Israel for 12 months. At the end of 12 months, the world will shake, and during that time, the Shechina (heavenly presence) will return to dwell in the cave of Moses. The Messiah will hide for 9 months – similar to the period of pregnancy – and then the people in Israel will hear a sound like the blowing of a shofar. .  Read More …

Opinion: Jewish Tradition as told by Rabbi’s does not include a literal divinely inspired  interpretation of the prophets or the Psalms. The Bible against warns against the traditions of men for both Jew and Christian Matthew 17:3; Mark 7;708; Colossians 2:8.

“Headline after headline heralds the Abraham Accord, the peace between Ishmael and Jacob. If you read the first book of the Bible however, not only will that not happen …

“He shall be a wild man;
“His hand shall be against every man,
And every man’s hand against him.
And he shall dwell in the presence of all his brethren.” Gen. 16:12

… but enmity between Esau and Jacob will be the cause of the final wars of this age.”

Despite his volatile temperament, God blessed Ishmael and promised his mother Hagar He would make him a great nation, Genesis 21:17-18.

Despite the trickery of Rebekah and Jacob, God thru Isaac blessed Jacob with the fullness of the promised land (Genesis 27:28-29 NIV).

Despite being the first born, Esau disdained his birthright and was not given title deed to the promised land. Esau would live by the sword. (Genesis 27:34-40 NIV)

We know from Bible prophecy and the prophet Asaph that both Ishmael’s and Esau’s descendants will one day form an alliance to wipe out the Jewish state. The current Abraham Accord notwithstanding.

Psalm 83:6-8 (the Psalm 83 invaders represent both Edom and Ishmael (a reference to the marriage of Esau to Ishmael’s daughter).

All the invaders will be neutralized to the extent that none are mentioned in the massive Gog Magog war to follow.